Shocked, stunned, saddened. Yet intrigued, inspired and still interested in continuing the discussion known as McQueen. Like Christian Dior, his legacy was short but the two have become the most important designers of the past century. Both focusing on proportion in forms both subtle and radical. A designer legend in his own lifetime, a forever icon after his death. One of my favorite artists, Tobie Giddio, herself known for abstract shapes and whimsical proportions pays tribute to one of our favorite designers. A talent so pure and vision so extraordinarily balanced between the future and the past, McQueen never turned in a so so collection. Everything he did was graced with a Midas touch so wicked and warped yet influential and ultimately wearable. Bumster pants anyone?

Like when Kennedy was shot, I truly believe that news of McQueens death took most of us by surprise, yet so many have been able to express their sadness through inspiring work and homages to a creator who ultimately inspired all who came across his work and strict design aesthetic. Giddio's drawings perfectly capture McQueen's powerful take on proportion, texture & pattern. 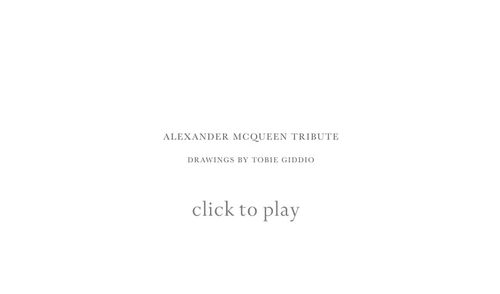 Why McQueen? Sum up how he inspires you.

McQueen's forms have always had a genuine other worldly quality – the feeling that these figures in his incredible forms were entering our world from the "other side". I am inspired by an artist who is clearly creating from this place, who's work is purely about bringing us something completely new – composed from the past and the future, totally relevant in the present. This is true inspiration. It strikes a cord. It is beyond the mind. It takes us higher, and deeper into our own process. After every collection I felt compelled to work.

His impact on the last 15 years of fashion. Comparable to Westwood?

When I think of McQueen in relationship to Westwood I think – rebelliousness with the outcome being extreme beauty – rebelliousness plus maturity. With this you have mastered something. Everything with McQueen had such incredible discipline, skill. It was always clean, all that wild energy and emotion contained and directed even if it was completely out of this world and when it went to a dark place.

Can the brand live on without him?

I really hope so. Yes, I think McQueen set something in motion that will continue and evolve. His death still stings but when I get really farsighted about it I see the manifesting continuing in his name. His successor Sarah Burton is an incredibly talented and courageous woman.

I think I drew them. I went through every piece of every collection and these were what stood out for me.  But also the shows themselves were so memorable. They were a blast of creative power like nothing else really.

Explain the uniquely abstract yet fluid approach to your work in general and how you incorporated it into these homages to McQueen.

Either I am drawing totally  from the minds eye or I am pulling from a designers work. When I am working directly with specific clothing, I go back and forth between the two. My intention is to keep the integrity of what was made and then at some point leave the reference completely in order for something completely new to emerge. A lot like the remaking of a song. For me this is the ultimate liberation of drawing fashion. It's fair to wonder why anyone would spend their life deconstructing and abstracting fashion. But for me, like McQueen, fashion isn't really about the clothes – it's about our inner worlds being expressed in shapes, lines, form and color in the most beautiful and modern way possible. 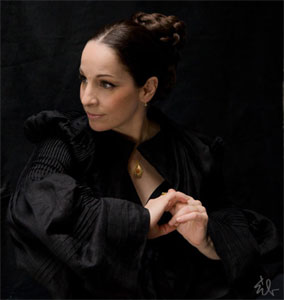