This past week I attended the first official installment of Mercedes Benz Fashion Week Stockholm. This being my first trip, I wanted to see exactly what the Swedes had to offer fashion wise.

Three days, two primary venues (most notably the impeccable Berns Hotel) and over 25 shows – allot to fit in, if you ask me. I reviewed Swedish staples like Tiger of Sweden (where I sat next to the official stylist of Crown Princess Victoria), Filippa K and Whyred – the majors showed us perhaps what we have come to expect from the region; perfectly cut, strong lines but also a fresh new sense of color, especially for mens – albeit clean and basic – they were styled with the perfect balance of edge and masculinity.

In addition to the shows I did two studio visits one with Carin Wester and another with the designers from Nakkna.

Wester's show (which might have attracted the most attendees, started ON TIME, causing me to nearly miss my seat) from where I stood the designers references of Patti Smith's Just Kids (a chronicle of the singers time with Robert Mapplethorpe) were enough to draw me into her studio: boys in lace and feathers and girls in hard "scratched" patterns or crochet / beaded bustiers raised a happy eyebrow. Its no doubt that one can see why Opening Ceremony picked up the designers first few collection and how she has grown into major retailers like Urban Outfitters for her diffusion lines.

(a look at the designer and her atelier)

Then a beloved friend and casting agent in New York, Natalie Joos, suggested that I meet with the designers of Nakkna. Their show happened to be the first of the week and it was with them that my love affair with Stockholm Fashion Week began. Their offerings had an eery sensibility showing sueded hand-formed dresses and to-the-floor jackets and pants (for both men and women) all accented with chalk raising from the floor. While meeting with the designers, at their showroom, we discussed their production in Estonia and the slow-growth strategy for their business. This is one Swedish name you do NOT want to forget.

Additional names to note for the future are: Klara Sjons Nilsson from the YFI Awards presentation and Johanna Milvert from the Textilhogskolan (the Swedish School of Textiles).

Lastly, I leave you with a bit of market – its without question that my FAVORITE accessories were those of Cheap Monday - clear plastic knee and ankle boots. Which by the way, were shown in the most sublime location during Fashion Week (just at the water's edge with a clear view of the hills and bridges that line the city). 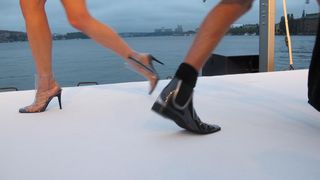 Keep an eye out for my art post from Stockholm, coming soon.