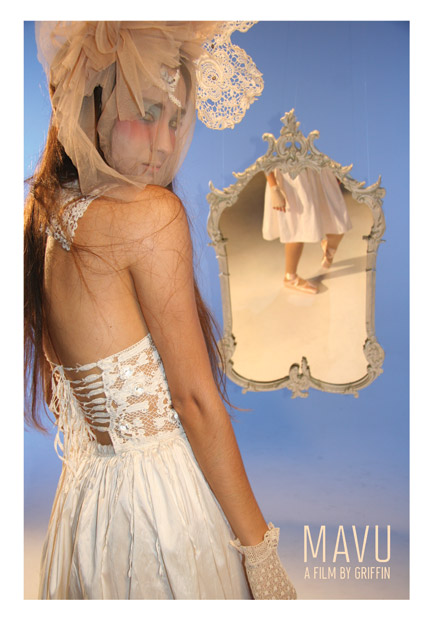 Hello All,
It's been a crazy couple of weeks for me and the next month looks like it will be even crazier. I have just finished my latest fashion film called MAVU and wanted to share the poster with you. I was recently commissioned by Alexandra Senes (who was introduced to me in Paris this past Oct. at Colette Rodarte exhibition by my good friend and filmmaker Benjamin Seroussi who has also created a film for the exhibition) as one of 3 filmmakers to create a fashion film predicting trends of 2010-11. The exhibition which is housed at EXPLOSION DE MODES in Paris runs from January 23rd to 26th. The theme I was given for my film was FUTURE BLOOD, which I found inspiration for, from art and fashion photography of the 1930's. I shot the film here in Los Angeles two weeks ago and was very fortunate to work with some of the best creators in LA, from top LA stylist Laura Duncan, makeup artist and David LaChapelle collaborator Sharon Gault, hair stylist Sean James, director of photography Ernesto Lomeli, production designer Emily Hughes, as well as many other talented people. The film was executive produced by my long time supporter Naoko Tokage. Thanks to all who helped make it happen.

This afternoon, I had a great meeting with my friends Dominique Martinez and Salvador Lleo at In A Place Post (which is located in Laurel Canyon in a 1920's, Japanese inspired hunting lodge which was built by Mary Pickford and Douglas Fairbanks and was the site where Pickford, Fairbanks, Chaplin, and Griffith signed the contract to create United Artists) , to set up a color correction session this week with veteran colorist Paul Bronkar, and put the finish touches on MAVU.

I am very proud of the film and excited to release it. I hope to have it up on line this weekend or early next week, for those of you who don't get a chance to see it at EXPLOSION DE MODES. Check back here for interviews from the set in the coming days. For press inquiries and more info on the film, please contact contact@presentfuture.net.