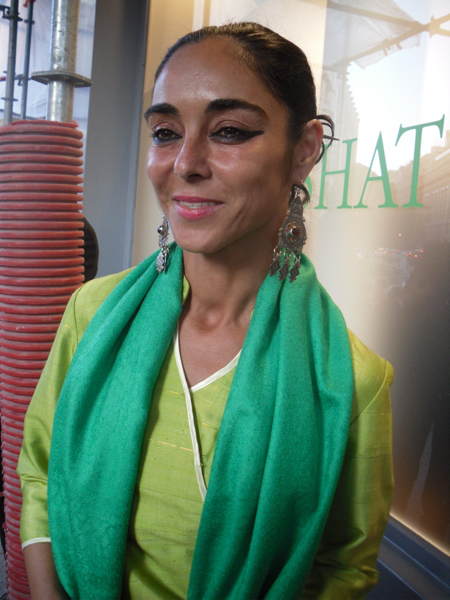 After a rather tense day my friend Akiko and I went to the opening of Shirin Neshat's Games of Desire at the Galerie Jerome de Noirmont.  Shirin won the Best Director at the Venice Film Festival last week.The Silver Lion was awarded to her for "Women Without Men" which chronicles the lives of 4 women during Iran's coup in 1953. She is an Iranian-American photographer and video director.

For her current exhibition at Galerie Jerome de Noirmont, Games of Desire, Shirin uses multi-channel film installation and photography to elaborate upon the ritual structures that define identiy. The project took place in Laos and is screened with a two channel projection, men on one side, women on the other, each reciting courtship songs. The singers are all elderly men and women, many of them are missing teeth, they are all incredibly sweet calling their would be lovers things like: my cucumber flower . Honestly, the films were transporting and immediately made me forget all of the stress of the day. The films are on the upper level of the gallery and they are not to be missed. I might go back to enjoy them one more time. Along with the films, Shirin Neshat presents photographic portraits of the men and women. I would suggest that you watch the films first and then enjoy the portraits.

Shirin Neshat was born in Qazvin, Iran and moved to the States in 1974.

All Diane's photos are taken with Samsung ST50