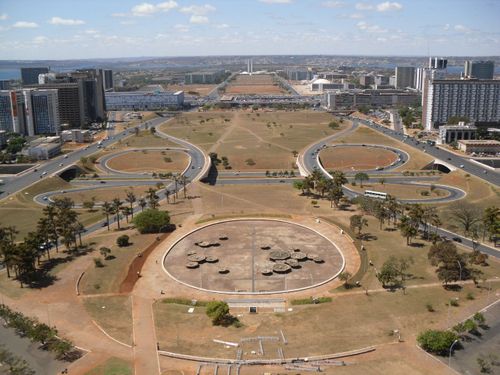 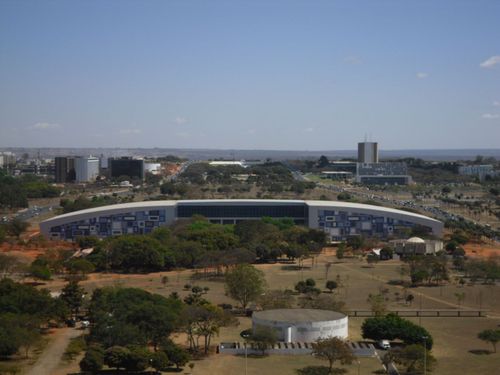 The blue building is the location for the fashion shows at Capital Fashion Week.

Glenn Belverio, a huge fan of Oscar Niemeyer, filled me in on the backstory to how Niemeyer ended up being the chief architect for Brasilia: he was not untried or untested as our guide told us. In the 1940's Kubitschek was the mayor of Belo Horizonte and he allowed Niemeyer to design several buildings in a park around a lake called Pampulha, one is the famous Church of St. Francis of Assisi, he also did a boat club and th eMuseum of Modern Art (which started out as a casino) and the buildings are rather acclaimed. Niemeyer forged a political friendship with Kubitschek so by the time Kubitschek became president of Brazil, Niemeyer was a big contender for the Brasilia job. Costa and Niemeyer both studied with Le Corbusier, so it was a good match.

Before Brasilia, Niemeyer was on the team that designed the United Nations in NYC in 1947 and he did a lot of buildings in Sao Paulo and Belo Horizonte (a luxury apartment building), so by the late '50's Oscar Niemeyer was quite famous. Thank you Glenn for the real story in contrast to the one told to us by the guide.