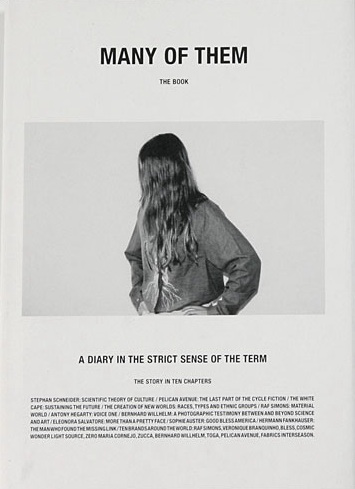 Dear Shaded Viewers,
Antonio Macarro made his book Many of Them last year as a result of his admiration for and analytical interest in the publishing world and its structure. His unconventional view of the fashion world has been published in a limited edition of 1000 and includes chapters on: Stephan Schneider: Scientific Theory of Culture/Pelican Avenue: The Last Part of the Cycle Fiction/ The White Cape: Sustaining the Future/The Creation of New Worlds: Races, Types and Ethnic Groups/Raf Simons: Material World/ Antony Hegarty: Voice One/Bernhard WIllhelm: A Photographic Testimony Between and Beyond Science and Art/Elenora Salvatore: More Than A Pretty Face/ Sophie Auster: Good Bless America/Hermann Fankhauser: The Man Who Found The Missing Link.
The book will be offered at ten stores around the world: SEVEN, NYC, OPENING CEREMONY, B STORE, HEIMAT, PARIS TEXAS, KRONKRON, PARK, SONG, PERSUADE, DEBUT
www.antoniomacarrostudio.com
Later,
Diane