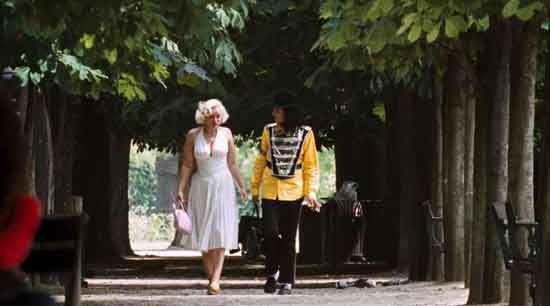 A scene from Harmony Korine's "Mister Lonely" Image courtesy of IFC First Take
www.indiewire.com has an interview with the "Fuck it Enjoy it While You Can" : Mister Lonely DIrector Harmony Korine.
Years ago Larry CLark discovered Harmony Korine, then Chloe appeared on the big screen in their collaboration KIDS and that was the beginning of both Harmony and Chloe's career.
Mr. Lonely stars Diego Luna as a disillusioned Michael Jackson impersonator and a fake Marilyn Monroe is played by Samantha Morton. Werner Herzog, not a newcomer to Harmony's films, plays a priest with a team of flying nuns. Mr. Lonely will screen at the Tribeca Film Festival prior to it's May 2nd release.
Harmony holds director Werner Herzog in high esteem. He sights two Herzog films that left a strong impression on me too when I first saw them: "Even Dwarves Started Small" and "Stroszek", if you've never seen either of them, watch them they are surreal.
Later,
Diane