MAWN is the name that Akiko Murata and Hiro Yumita came up with and it stands for the  contraction of the two words: man /woman, he's a photographer and he's a mix of Burmese and Japanese and Akiko is multi-disciplinary stylist//writer/vintage small expert, etc. etc.. Last May when the cylone hit Burma, Akiko and HIro decided they wanted to fly to Burma and cheer up some friends and at the same time document the experience. 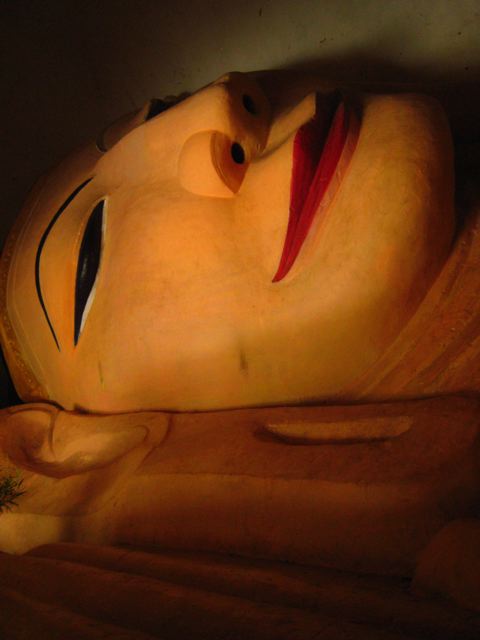 In Pagan there is one temple where the King and Queen are buried and the King wanted to make a buddha in the image of himself and the buddha occupies almost the entire space. Pagan is an area where there are a lot of old and important pagodas. Burma is still pretty free from tourists. 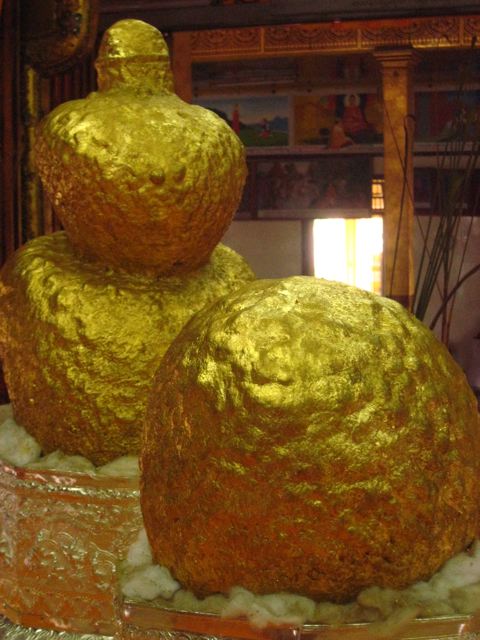 Yumita went to Burma before Akiko, above are 'power stones' people touch them to get regenerated. "All the temples are alive and very integrated into the daily life. It's important historically but also it is natural to pray there on an every day basis. I went to different temples and pagodas every day." 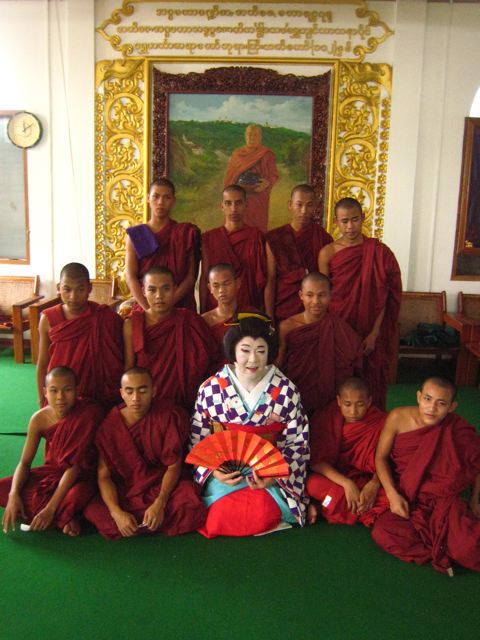 "This guy called Ofuku, means in history giving happiness and luck in Japanese. He pretends to be Ofuku and performs all over the world at his own expense to give happiness to the people. He's very rich, his day job is as a wedding planner. The monks reaction was a bit surprised. Monks are never surprised. What ever comes they accept. It was like, "Welcome" to everyone. That is really funny about the monks. We saw kids that lost their parents with the cyclone. We gave them food and clothes. We felt like Santa Claus, they were really happy." Ofuku came with wigs. Ofuku was only there for 4 or 5 days because he's busy with his wedding planning business. 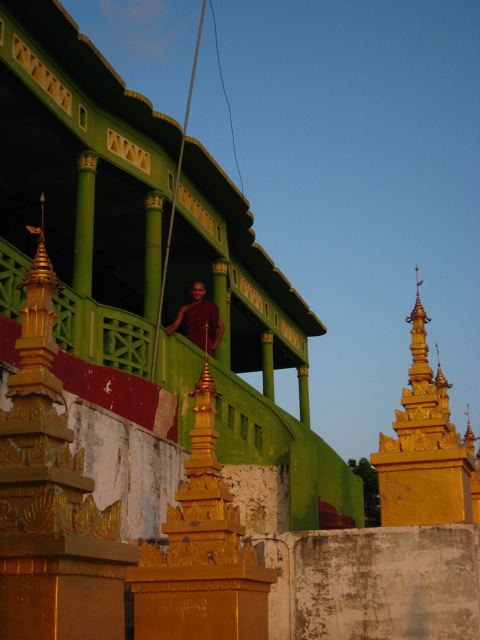 At the airports we were worried that they would take our food and wigs. THat was not at all the case, instead It is a country that welcomes tourists. It was like paradise. You did not feel any danger." You need a tourist visa but that is fairly simple to obtain. 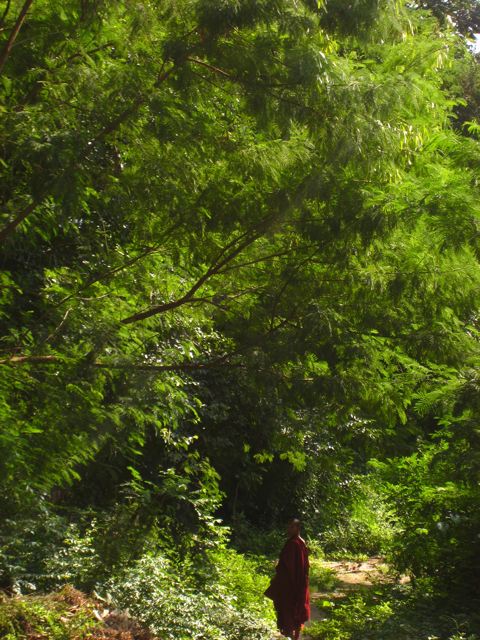 This temple belongs to Yumita's family. His dead grandfather owns the temple and 150 monks are living there. "When we arrived the head monk had just died but what was funny was funny was when we asked  the monks how they were and who was taking care of them. They said they were not sad, he went to another place we should celebrate his travels. 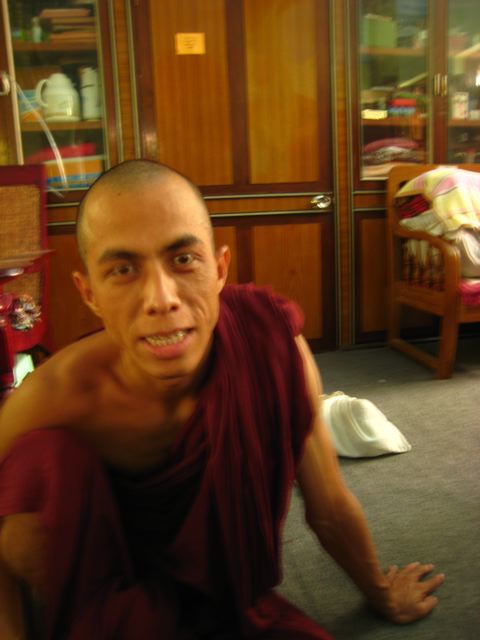 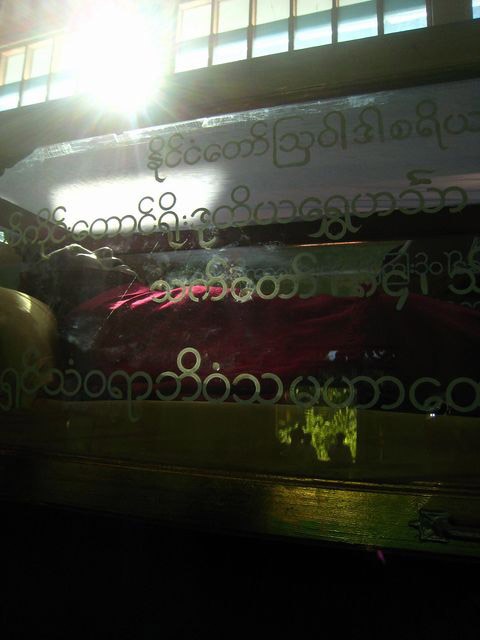 They decorated the place and put the body in a transparent casket and they decorated it kitsch style and they took photos of themselves with the dead monk in the clear casket. For me it was shocking as the  body alive  is so different." 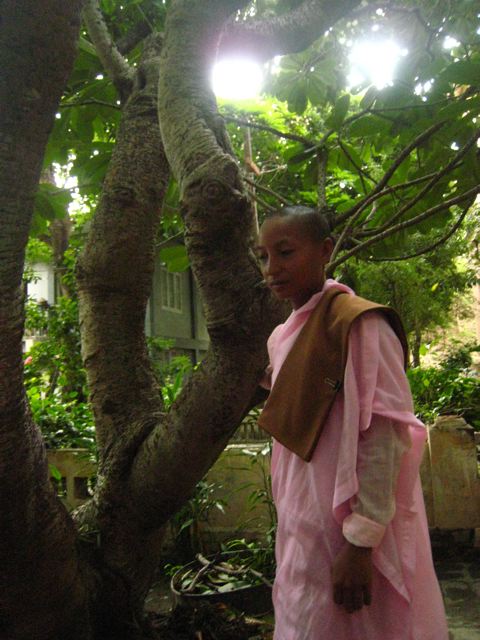 Female monks wear pink and they throw away desire that is what their life is about. They don't wear make-up and male and female monks stay in separate buildings. Basically they pray, clean up and never eat after noon. They are spiritual and the local people give them money to pray for them. 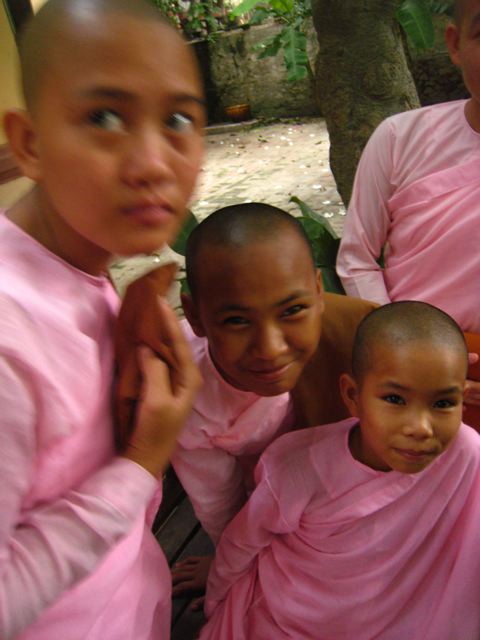 A group of female monks. "They were really coming to me, holding my hand. Male monks do not approach me or touch me. Female monks never touch males. They are really happy. Yumita, because he is the owner of the temple, speaks affectionately with them and calls them skinheads,  they laugh with him, they never get angry but just receive everything." 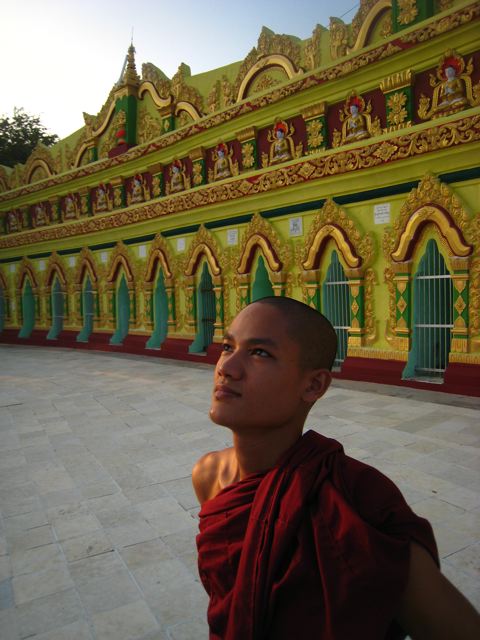 "Some of the pagodas in Mandalay have 108 doors. For each door there is a Buddha. 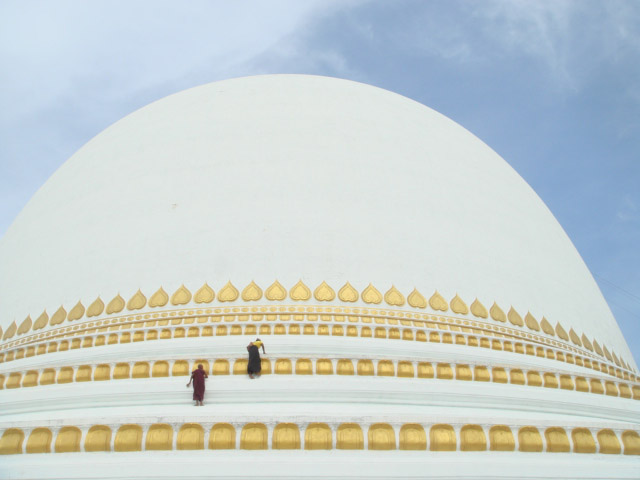 This one is not one ot the 'tits' pagodas but many in Mandalay are shaped in the form of a woman's breast with the gold nipple on top. This a normal way of talking about the Mandalay pagodas. 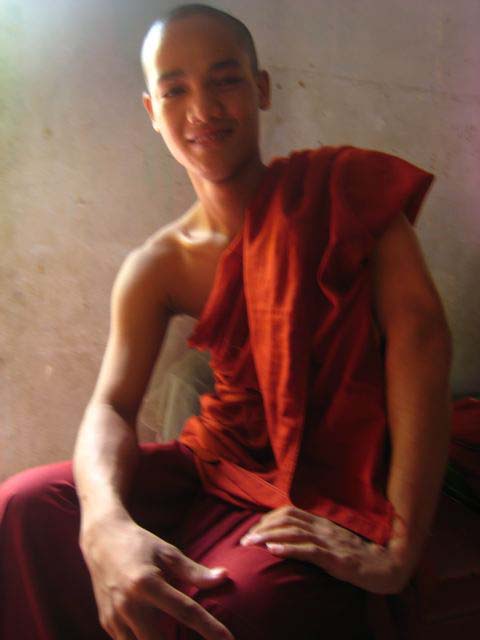 The story of the Ego and the Fat Ghost: "Sometimes the monks would tell us the story of the fat ghost. The ghost is fat because his own ego is huge because he sees people that have more than he has and he steals from them and the more that he steals the fatter that he grows. His  head, however, is very  tiny and his lips are so small that he can not even drink water. The moral of the ghost story is that  if your ego is too big then you will encounter this ghost. So the monks, of course, will never see the fat ghost but they know about him." 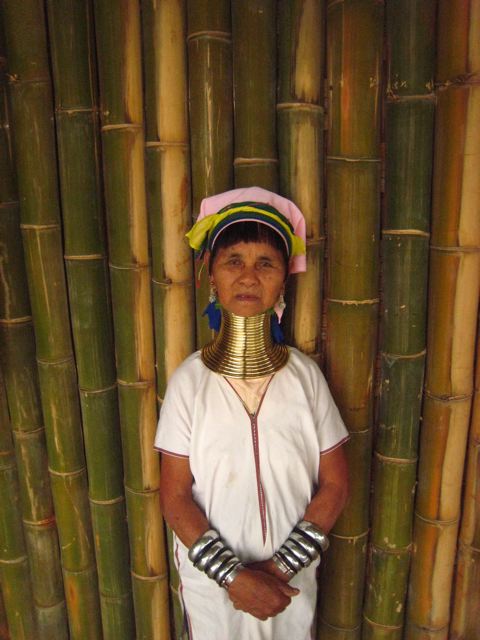 "A small group of people are called the  'long neck' people. They believe that aesthetically long necks  are beautiful. This woman was  cleaning her clothes at the river when Yumita saw her. He was really excited to photograph her. She is very tiny, the whole group of 'long necks' are very tiny. 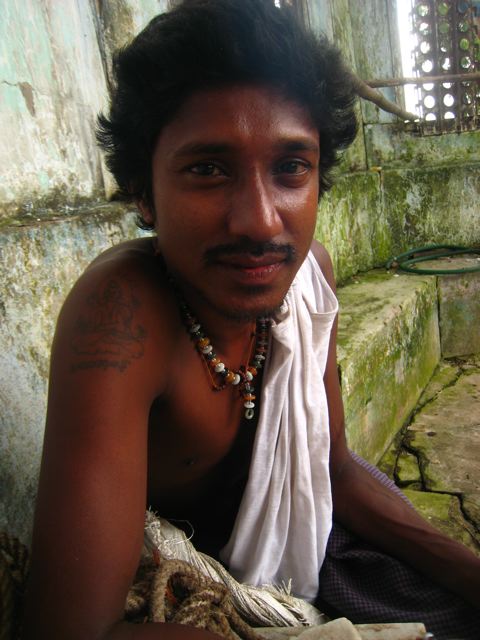 In Yangon, a friend of Yumita's, he sells cocoanuts but he's also a fortune teller. "I'm afraid to ask him anything because I'm afraid of what he might say. I didn't want to ask too much." 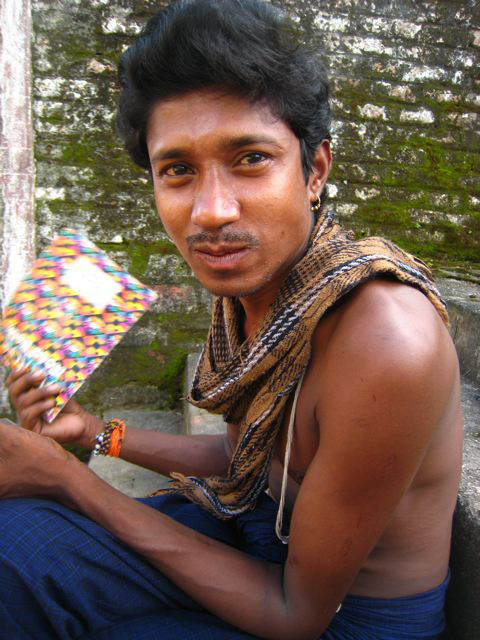 "We had meditation with the monks. It's about finding emptiness." "I think it helps you to feel the energy of the space. It is all about connecting yourself to the universe. 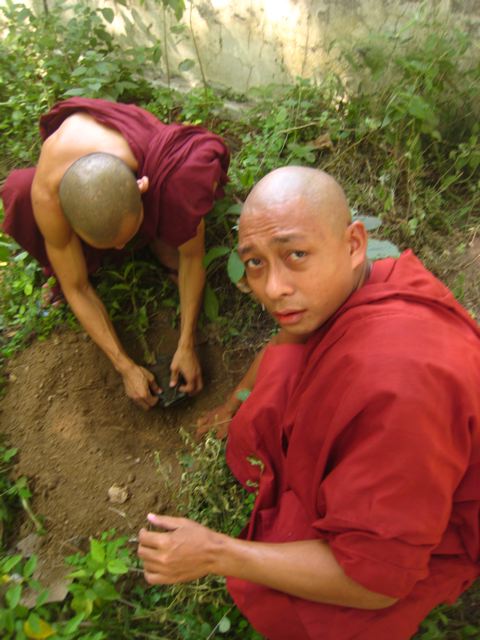 I was in Yangon for a week and then Pagan for four days and Mandalay for a week. Mandalay was where the Yumita family temple is. We stayed with the monks, We did not stay in the Temple but we were always with them. We planted things in the monks garden. One of our projects is we want to share something with the monks after their cyclone disaster. We planted jasmine, bananas, and tropical things so that they will have something to enjoy. "I was happy to share something with them. 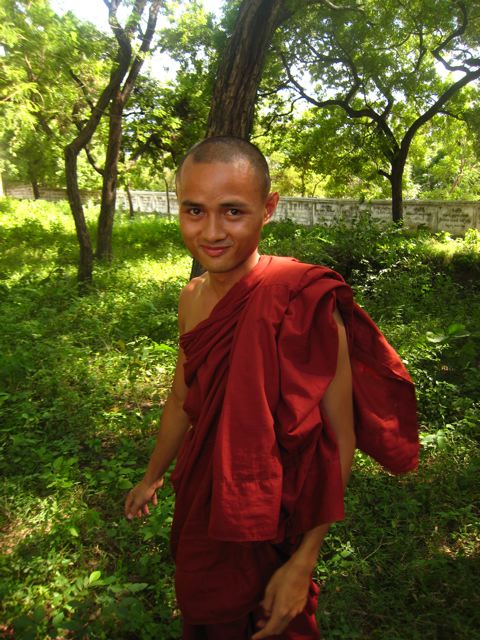 We are giving but actually we are receiving. We asked the monks where we could plant things together and next year when we come back we will  see everything growing and then we will plant more trees and flowers so we can share in the happiness of seeing what nature can offer. Actually the monks  love people coming from other countries. Burma is a country that is really closed off and they do not have that much information from other parts of the world. Monks are really happy that people come and appreciate them. We are thinking of turning little cottages into a place where  foreign people can come and stay and feel the monks vibration. We want to respect their lives and the difference in the economic structure. We need someone like Yumita who speaks the language and understands the customs to act as a guide. 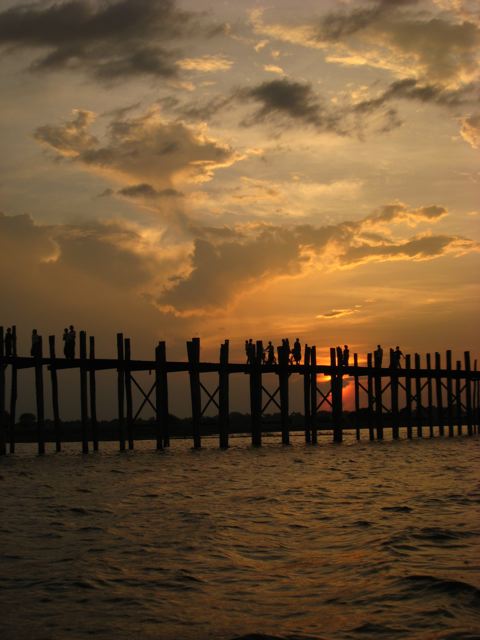 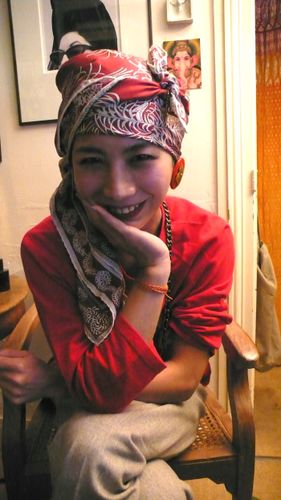 All photos are by Hiro Yumita

Eventually their Burma experience will become a book. At the moment Akiko and Hiro are working on a book which is the Tokyo guide by Ofuku. The story is that Ofuku is a woman from a long time ago and she returns to Tokyo after 200 years and  sees how the city has changed. Ofuku  is enjoying the changes and wants to experience them. Behind the story is the desire to show the readers the mentality of Japanese people today.