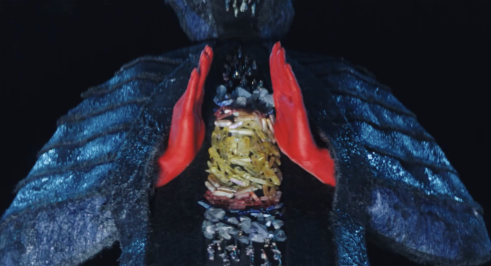 Erik Bergrin is a fiber artist based in New York City, who fuses ancient and contemporary fiber techniques in works which alchemize psychological shadows into creative freedom. He draws on his background in costume design, as well as a study in meditation and the investigation of the mind in order to make the work. Using fiber in its relation to tradition, the materials become cultural symbols about my personal myth. “The basis of my study of spirituality, is to find exactly what it is in your mind you don’t want to be there and rip it out. My work is my way of bringing out my shadows.” Prior to this film he spent 4 years on the project Shadow Work.

One reason for our discussion aside from the fact that I just returned from Fashion Clash where the jury, of which I was a part, had awarded ‘The Eight Dissolutions’, a film directed by Arkan Zakharov with the concept, clothing and music coming from Erik Bergrin, the best in competition fashion and video award, was to find out why he chose death as a topic for his film. We all know we are going to die but few of us want to talk about it. The film is about shutting down all of one’s senses. The topic sounds dark and I must say looks dark but as Erik says it is about bringing you to a point of cherishing the moment as opposed to wasting your time on earth. Due to COVID Erik had the time to spend a year working on this project of dealing with the topic of death.

The video takes its name from the 8 dissolutions, a Tibetan Buddhist meditation practice that visualizes the shutting down of one’s senses one by one as an exploration of mortality in the recurring cycle of death and rebirth. The intricate wearable pieces seen in the video are created by Erik Bergrin using traditional techniques such as weaving and felting, as well as grown from unusual materials such as seaweed, fermented tea, and different types of crystallizations. Each piece is associated with a sound that is layered one-by-one to make the soundtrack for the video, performed by Erik. Each dissolution is accompanied by a mudra, a hand sign. A butoh dancer acts as the mudra teacher and guides the viewer through the journey.

Crystals were grown on fabrics, others made out of seaweed or kombucha all were made to appear alien to you. Better than me going on about what Erik had to say just click the link above.