In times of hardship and instability, there are a few designers one must look for reflection and though Rei Kawakubo may seem like a designer of few words, her work speaks volumes.

A lamentation for the sorrow in the world today and a feeling of wanting to stand together were the only notes given to the audience for the Comme des Garçons’s spring summer23 show. A brief and cryptic explanation of what lies behind Kawakubo’s intentions… but she is designer who lets the work speak for itself, allowing the audience to interpret her process and inner thoughts, as she takes what surrounds her and manifests it in the form of clothes.

This season her collection began with a monochrome palette of black and white looks, the models’ heads were peaking out of the sculptural cocoons as if they were trying to hide, finding protection under the heavy layers. Then followed a group of voluminous silhouettes in exaggerated forms and cylindrical shapes, invading as much of its surrounding as possible, like an expanding cage.

As if they were ready for battle, daisy-chain armours surrounded the immense figures, accessorised with what looked like cage crowns. Towards the end, the monochrome palette took a turn and we were introduced to radiant floral jacquards, one particularly exploding outwards from a black hole placed in the front of the chest, one of the most striking looks of the season. In these trying times, it was perhaps a much needed allegory for hope. 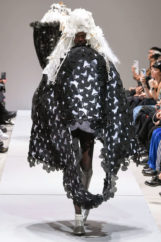 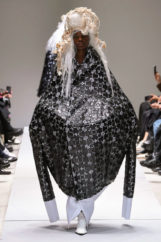 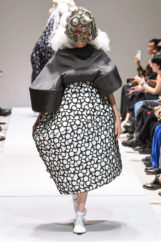 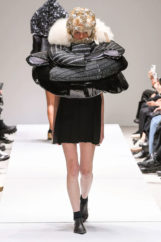 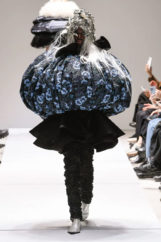 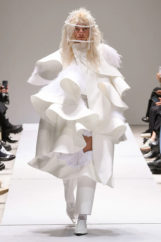