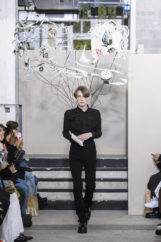 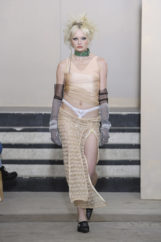 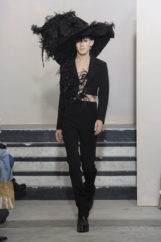 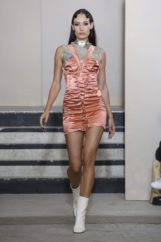 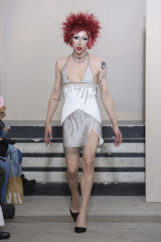 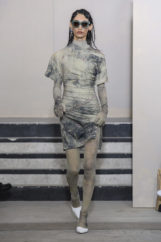 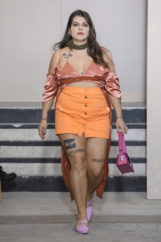 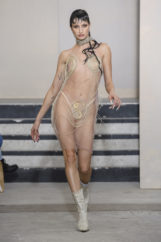 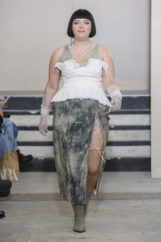 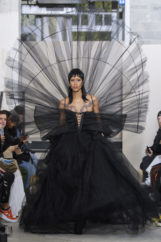 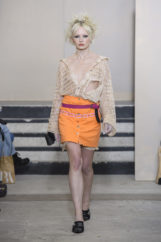 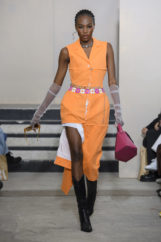 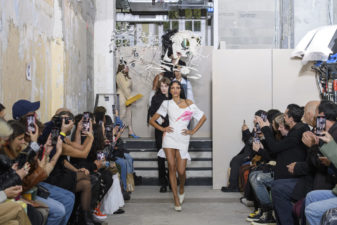 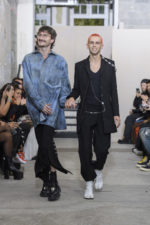 Paris Fashion Week opened with a refreshing Weinsanto  show that had him putting his friends on the catwalk at 35/37. Each look was made based on the DNA of the wearer. The mood was the aftermath of a glamorous evening, where maybe you had an overdose of fun.

It was all about having fun and even though some of the looks were quite extravagant, they were totally wearable. Colours were orange, green and yellow with his signature pieces bomber jackets, re-cut jeans mixed with couture pieces. This season the print was by Alix Stemmelin in the mood of a party goer sipping drinks. Weinsanto used eco responsible fabrics like Supima cotton for the jean jersey pieces and shirts and also deadstock from LVMH Nona Source.

Headpieces were very music hall especially the one on top of a black gown or the Mardi Gras bride in white which was nothing short of outstanding. She was like a royal queen of I don’t know what country, just a sensation. The designer Charles de Vilmorin wore a poetic headpiece sculpted from welded metal and embroidered in feathers and rhinestones.

In a nod to his sister and baby nephew Weinsanto got into snaps that transform dresses and shorts and had pockets that snap open for a mother to breastfeed in style.

Weinsanto’s former assistant Bjorn Backes made hand crafted jewellery set with Swarovski crystals.Shoes were from Bimba y Lola and Doc Martens. The show ended with Victor and his boyfriend walking the runway. It was a success and you could feel the love in the room.