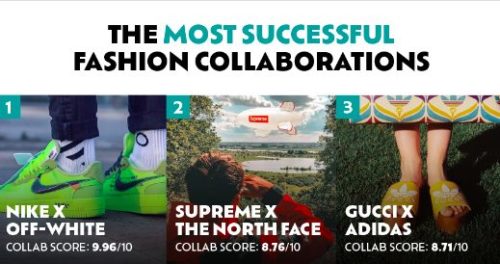 Fashion collaborations have exploded in popularity over the last 10 years. From Supreme x Louis Vuitton to Gucci x Adidas, high fashion houses are teaming up with streetwear giants and other fashion houses to bring their designer fashion to new audiences and create bold collections that are outside of their typical style.

But which is the most successful fashion collaboration of the last 10 years? We’ve looked at social media data, Google searches and the number of articles written about them to find out which are the most popular and which failed to grab the attention of fashionistas.

Taking the top spot as the most successful fashion collab of the last 10 years is Nike x Off-White. The collaboration takes the top spot for a whopping four of the five factors we looked at and ranks second for TikTok views, giving it a collab score of 9.96.

Supreme x The North Face is next on the list, ranking in the top three for three factors. The two brands have a long history of collaborating, joining forces as far back as 2007, and have released over 20 collections. Together they have a collab score of 8.76.

In third place is Gucci x Adidas, with the luxury fashion house and the sportswear company recently dropping their highly-anticipated collaboration for AW 2022. The collaboration scores 8.71 in our index thanks to its ranking in the top five for three factors including reaching first place for TikTok views.

The Most Searched for Collaborations:

First collaborating in 2017, Off-White and Nike shook up the sneaker world when they dropped “The Ten”, Virgil Abloh’s take on some of the brand’s most iconic footwear. Five years later the Nike x Off-White Air Jordan 1 OG Retro High is considered the holy grail amongst sneakerheads with pairs going for more than £4,000 on the secondhand market.

Taking second place is rapper and fashion designer Kanye West’s collab with one of the world’s largest outfitters. Launched in 2021, the collection featured comfortable and boxy basics like hoodies.

Demna Gvasalia sent shockwaves through the fashion world when he sent Crocs down his Balenciaga catwalk during Paris fashion week in 2018. The 10 cm platforms polarised audiences and their success sparked further collabs, the most recent being the stiletto croc debuted in 2021.