“Fashion Babylon” explores a pivotal moment, as if suspended between two different ages. It documents the splendor of the “before” and ventures into the uncertainty of the “after.”

In 2018 during ASVOFF 10 I screened a pilot for what was to become an 87 minute documentary on three artists trying to navigate a transient lifestyle from glamorous Front Rows to cheap hotel rooms. Each seeking to be recognised and successful. The doc follows the family of characters through the fashion weeks and seasons of the world, Paris, Milan and elsewhere. These three self-built legends vie incessantly for recognition and Matarrese is there to document their most intimate moments that generally are kept quite hidden. “I now realize that I have shadowed a species that is bound inexorably for extinction. I found myself in the center of a universe that had reached maximum entrophy. I was watching when it reached the point of no return, when it imploded and everything went into freefall.” said Matarrese.

Matarrese considers that he is exploring the ruins of a latter-day Versailles. “I listen to the hypnotic tales of its courtiers: the royal jesters, the fallen courtesans, the inaccessible upper crust, the misunderstood artists…” said Matarrese.

In this three-part choral recitation, the characters’ stories develop in parallel, occasionally intertwining. The three actors in this real-life drama are Casey Spooner, Violet Chachki and Michelle Elie. Casey and Violet could be a brother and his little sister. Michelle is the protective, reassuring mother. Her “children” lost in a Fashion wonderland fall into the enticing rabbit holes. Each pursues their own dream in a world in constant commotion.

“Fashion Babylon” spins in the whirlwind of fables and fates of these international fashion-show front-row heroes. For a decade now, their world has been crumbling. The earthquake caused by the Covid crisis only hastened a reckoning. Nevertheless, the pandemic is not necessarily the pivotal point or the core of our collective narrative.” says Matarrese of their crumbling universe.

Like in Harold Ramis’ Ground Hog day the cast of characters seem to be reliving the same day over and over. From city to city the party never ends, they are stuck inside an endless loop, always living the same sequence over and over. “Our characters are the heroes, the inhabitants of a fantastic, extravagant kingdom. The Front Row is a parallel world where time stops, geography’s bonds are loosened, distances shrink. I am pursuing the idea of painting a magical land, a looking-glass world, an Atlantis-a Babylon, in fact.” says Matarrese.

The cast of characters is transported to events in a gleaming Maserati passing a crowd of Yellow Vest protesters, a blindspot to the inhabitants of the car. “It was as if we were all in a bubble, and the story I want to tell is the one that happens inside that bubble.” The viewer might feel this is an imaginary planet however it is quite real with its own rules, ranks, landscapes and inhabitants.

Similar to the 2019 documentary that Matarrese did about his own family’s economic crisis, Everything Must Go, about the family business in crisis, Matarrese describes the shattering of the fashion world through the routine agonies and ecstasies of a “tribe of characters” indigenous to it. The idea of the film is to paint a family portrait which it does quite successfully.

“I saw exhaustion and decline set in as these “beautiful people” burnt themselves out, chasing their dreams in a world made of fluff and hype. It was in their moments of weakness and crisis, behind their exotic get-ups, that I found something authentic: the universal human side of them, with which we can all identify.” says Matarrese. 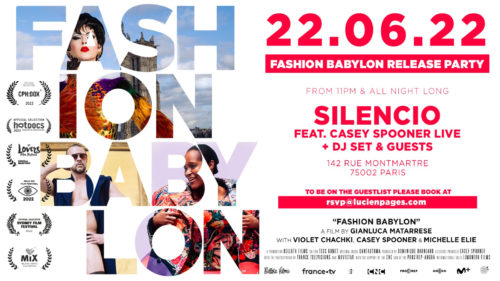 Born in Haiti, raised in New York, and now living in Cologne, Michelle is a striking figure and a magnetic aura. During Fashion Week in Paris, she is one of the most-photographed people, and she is on the designers’ A-list for a front-row seat at the shows.

Almost immediately after her debut as a model in New York City, Michelle was disillusioned by the rawness of the trade. She abandoned her career to start a family in Germany with her husband, designer Mike Meiré. Together, they have three children. Her two eldest sons are following in their parents’ footsteps, and have just started a career in the fashion industry.

In terms of producing art, Michelle has collaborated with her husband on several projects. She has also worked with other designers. Recently, she and Michaela Buerger created a collection of knits aimed at the economic empowerment of over 300 women who were victims of the war in Bosnia-Herzegovina. As part of this collaboration called “The Protectors,” Michelle traveled to Sarajevo, to meet the knitters and work with them directly.

Considered one of the greatest collectors of the Japanese brand Comme Des Garçons, Michelle transformed her wardrobe into an exhibition called “Life Doesn’t Frighten Me: Michelle Elie wears Comme Des Garçons.” The show took place at the Museum Angewandte Kunst in Frankfurt, live and online, from April to October 2020.

Michelle tries to use the clothing to tell a story. She wants to give a deeper meaning to the hundreds of dresses she has collected, like museum pieces, over the years.

As the exhibition attests, Michelle has her own way with fashion. It’s not the other way around. Her highly personal interpretation is what earned her iconic status. She owes the title Vogue bestowed “Queen of Street Style” to her fearlessness.

Violet was born to strut the stage. Her wit is incisive, and she can throw a hissy fit on command. She’s all the drama anyone needs. She began performing in drag about 10 years ago, at the age of 19 at the bar LeBuzz in Marietta, Georgia (USA). Using a fake ID to perform in local drag shows, she eventually won Miss New Faces at Friends on Ponce in Atlanta and was adopted as a « drag daughter » by drag queens Dax Exclamationpoint (who competed on the eighth season of Drag Race) and Genre Monster. Later, Chachki was enrolled at the Savannah College of Art and Design at the Atlanta campus for fashion design, but dropped out to focus on doing drag.

Fiery and provocative, full of pride and duplicity, she winks when she shocks the prudes. Though she doesn’t know exactly where it will take her, she remains true to herself: “I’m still young; I want to get the most out of life.”

Torn between her career as a drag queen on mainstream mass-market TV and the arty world of fashion, she has just launched her own YouTube channel and collaboration with Gottmik, another successful drag and make-up artist.

Meanwhile, she is a moving figure in the world of Fashion: she has walked for Moschino, participated in a performance for VOGUE ITALIA, and shot a promotional video for PRADA with Sarah Paulson.

Violet had just mounted her own solo show and begun touring with it.

A mass of paradoxes, Violet explicitly formulates her wish to distance herself from this world, while imagining she might become creative director of a brand that already exists, or perhaps create her own brand.

At first glance, it seems as if Casey Spooner was born into the art realm. And perhaps he was. Spooner didn’t begin with conventional training, which explains why he’s such a pioneer now. His mother was his art teacher, adopting an approach and theory in the 1970s that was known as “Cybernetic Creativity.” It was in these early, impressionable years that Spooner developed his own beat.

In 1989, he went on to study at the School of the Art Institute of Chicago. After college, he stumbled into Doorika, a performance arts collective based in Chicago and New York City. It was there that he wrote and produced original content from ’91-’98.

It almost feels otherworldly for an individual to have the accolades and energy of Spooner. He’s a video-artist and experimental theater performer, but that’s only scratching the surface.

His fervor for flourishing in every medium he can get his hands on is refreshing and intriguing. It is his vibrant mind and unapologetic energy that propelled him into electroclash music band Fischerspooner. With the success of Spooner’s musical act, it’s expected to settle there, but he always strays away from the expected.

From photographing Chloë Sevigny for XOXO Magazine, to co-directing the 2012 independent film “Dust,” Spooner isn’t slowing down anytime soon. In fact, there are some channels that he’s just getting started on. One of those is politics. “Spooner 2020” is the name of his campaign for the presidency of the United States.

Casey’s career is a parable.

He may or may not make a comeback as a solo music artist, may or may not be elected President of the US. His get-rich-quick scheme may crash and burn – or he may continue to teeter on the financial tightrope.

Casey is in his 50s now. His vision of life and his priorities have evolved. He is constantly in touch with a younger generation – like Violet Chachki – driven by the same quest for success.

His life is not a success story; it is a story about what success can be.

Gianluca Matarrese (1980) was born in Torino and moved to Paris in 2002 to study cinema and theater. He graduated in History and Critique of North American Cinema at the University of Torino and Paris VIII, also graduating at the Ecole Internationale de Théâtre Jacques Lecoq in Paris. In 2008 he started working in French television, as a writer and director for its comedy series on OCS channels broadcast until 2012. Then he continued as author, reporter, artistic coordinator, segment producer in entertainment department for moreover than 25 programs and all French networks. He also works as an actor for cinema and theater in France. Between 2013 and 2014 he directed two short-films. « My Movie like Kiss » was awarded the Achille Valdata at the Torino Film Festival. In 2019 his documentary « Fuori Tutto » won the award for Best Italian Documentary at the Torino Film Festival.

His film « La dernière séance (The Last Chapter) » had its world premiere at the last Venice International Film Critics’ Week, winning the Queer Lion. The film has been selected at IDFA, Thessaloniki, and keeps touring in other international festivals. He is currently working on the film « Il Posto (A Steady Job) », co-directed with Mattia Colombo. The film will be presented in Vision du Réel and Hot Docs.

He directed, for France Télévisions, the musical documentary on the singer Barbara Pravi, representative of the Eurovision 2020.

Gianluca is also a fashion-film and docu-fashion director. His video publications have appeared in KALTBLUT, ODDA, NUMERO BERLIN, L’OFFICIEL USA etc. And his video installations have been shown at the Museum Angewandte Kunst in Frankfurt and at the Mannerheim Gallery in Paris.

He is also involved in pedagogical and educational activities (history of cinema, screenwriting and directing) in high schools, colleges and universities (Télécom Paris).

Written and directed by Gianluca Matarrese

with the participation of France Télévisions

and the support of CNC and Procirep-Angoa