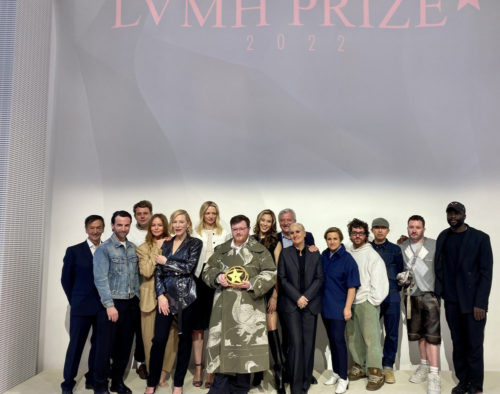 Steven Stokey Daley of S.S. Daley clearly was not prepared for receiving the LVMH Prize as he gave an emotional and quite sweet acceptance speech. He said it felt like he was receiving an Oscar and handed to him by the ever beautiful Cate Blanchett. There were 8 finalists and two of them shared the Karl Lagerfeld Prize 2022. It was split between American Eli Russell Linnetz of the brand Erl, who recently worked with Kim Jones on a capsule collection for Dior Homme, and Idris Balogun, a Saville Row trained tailor who founded the Winnie New York brand.

I remember, when I used to be involved with the Festival d’Hyeres, Michel Mallard, the Director of the Photography Competition, said that the fact that they were in the final selection made them all winners. What happens frequently is that the participants that do not win go on to have the most successful careers. In an article on Fashion Network, Godfrey Deeny pointed out that non-winning LVMH Prize finalists included the uber successful brands: Jonathan Anderson, Virgil Abloh and Simone Rocha.

The awards ceremony took place at the Louis Vuitton Foundation followed by a cocktail this evening at 61 bis rue de Monceau.

Continued success to all.