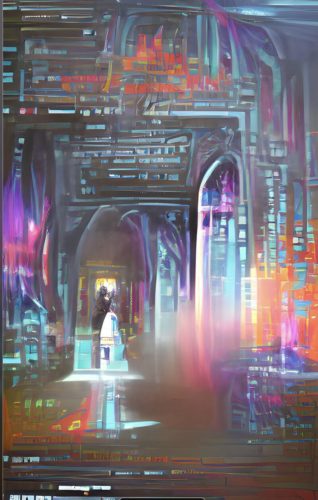 The idea that only ads or NFTs or sales of virtual shoes can pay for the construction of metaverses lacks imagination. There will be metaschools, metacathedrals, metamuseums, metamalls, metaplaygrounds, metaconcerthalls … the list will be as varied as the real world. And just like the real world, some will be paid for by public funding, private organizations, and ticket sales. Just like in the real world some will be open to widen the funnel to consumers, while others will be closed to members only.
There will be magnificent free to play metaspaces that will seem to be free at first but will cost visitors in their personal data and ultimately personal attention. These metaspaces will have no reason to connect outside of itself.
There will be dark obscure metaspaces, designed as gathering places for sub-sub-cultures that will also have no reason to connect outside of itself.
Finally, there will be wide open metaspaces, “connected” to other wide open metaspaces – they will be open and connected because they will have no reason to shut themselves off. Will these public metaspaces be publicly funded? Crowd sourced? Combination of both? What does “connected” mean between metaspaces? A click on a public directory? A universal coordinate system? A domain name?

All good questions that have nothing to do with ads, or NFTs or virtual running shoes….yet.

PS. MMOs and games are closest but the range of activity within games are limited. So for me, the definition of the metaspaces will not be wether it’s open or close, but on the use case. If it’s a VR battle royale in the Louvre, then it’s still a game. If it’s a congregation of mormons, meeting every Sunday morning in their island in Fortnite Creative, wether it’s from desktop or VR, then it’s the beginning of these non-gaming metaspaces.

NFT (the tech not the art) or similar will be part of the foundation maybe, just like encryption is foundation of e-commerce. A platform might “allow” NFTs as long as it doesn’t off balance the economy … if so then it’ll be some other platform that is purely ad driven and no internal economy to unbalance.

About YumeGo and its CEO/Chief Designer,  Wilson J. Tang:

The age of AR requires entirely new design approaches that spans industrial design, UX/UI, 3D art and video games. For the last 12 months we have been focused on building YumeGo – an app and platform to let people discover enriching interactive experiences in the world around them. We are developing experiences such as AR STEM games and AR museum exhibits – experiences intended to inspire and engage the next generation. We are committed to a mobile-first data-driven approach to our entire stack, optimized to reach anyone with a smartphone at first, and new AR/MR devices in the future.

Prior to this, I was one of the founding members of Kabam Vancouver (formerly Exploding Barrel Games) where my team developed games that was downloaded more than 200m+ times, earning Editor’s Choice in 100+ countries and revenues of usd$300 million+. Duties included Art Direction, Creative Development, Branding, Marketing, UX and Talent Development. Prior to Kabam I was the Senior Art Director/Creative Director at Electronic Arts/Blackbox where I oversaw the visual and creative development for one of their biggest IP’s.

Prior to games I worked at George Lucas’s Industrial Light and Magic (ILM) for 7 years as Visual Effects Art Director. Projects at ILM include Spielberg’s “A.I.:Artificial Intelligence”, Ang Lee’s “The Hulk”.
During preproduction of “A.I” in 2001, I pioneered the use of real-time game engines for use in previsualization of virtual environments. The technique was used by Steven Spielberg and I was granted a USA patent for the process.

I have lectured on UX Design at Emily Carr University of Art & Design, and have been on the board of advisers for the Intercross Creative Center (icc-jp.com) in Japan since 2001.