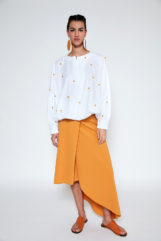 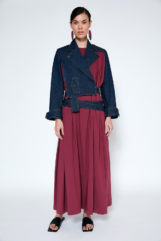 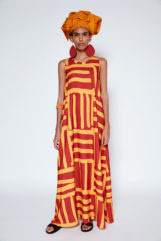 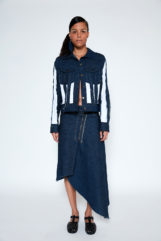 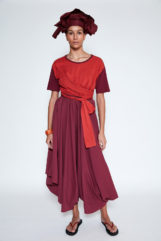 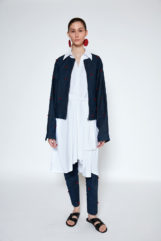 The invitation said the Mossi show would be shown next to the inverted pyramid at the Louvre. That was before I became aware that in fact Mossi has opened a permanent boutique at the Printemps store inside the Carrousel du Louvre shopping complex which is located a stones throw away from the gallery space in the Carrousel du Louvre. I hardly recognised Mossi Traore because between the time I visited him at his atelier, Les Ateliers Alix, in the Paris suburbs, he cut off his lovely dreadlocks.

Mossi’s S/S collection was a collaboration with the Malian artist Ibrahim Ballo. Mossi was born to Malian parents however he grew up in the Hautes-Noues housing estate in Villiers-sur-Marne. The collection consisted of 16 pieces he designed in collaboration with Ibrahim Ballo which is reflected in both the graphics, the textures and the color story . Ballo’s artwork was also exhibited in the gallery space.