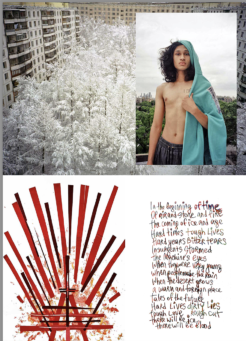 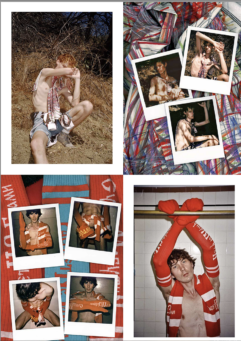 The Russian-American artist, author and activist,  Slava Mogutin and Rassvet (PACCBET, the Russian word for “Dawn” have launched a special collaboration. Rassvet is founded by Gosha Rubchinskiy and Tolia Titaev in an effort to revitalize the cultural landscape of their city through fashion, art, skateboarding and music. The two met in Moscow in 2005 and have collaborated on projects for Interview Russia and Man About Town (UK).

As part of RASSVET FW21, under the banner РАССВЕТ НЕ ЗА ГОРАМИ
(THE DAWN IS COMING), comes a capsule collection featuring Mogutin’s photography, drawings, texts, and tattoos. A selection of t-shirts and shirts, hoodies and sweaters, socks, scarfs and skateboards offers a unique view into the artist’s diverse universe.

Alongside the collection, Mogutin created a limited edition zine shot in
the summer of 2021 between NY and LA. This multifaceted series of portraits documents Mogutin’s friends, queer youth, and fellow artists wearing his new designs and depicted in a variety of mediums including film, digital, and Polaroid photography, and body scans. The zine is illustrated with Mogutin’s visual poetry and artwork.

To celebrate the launch of this collaboration, a site-specific multimedia exhibition will take place on October 1st at 3537, a new art space in Le Marais located at 35-37 rue des Francs-Bourgeois. The exhibition will remain on view through October 8th, followed by the release of the collection at Dover Street Market and Comme des Garçons stores, as well as specialty skate shops worldwide.

Born in Siberia, Slava Mogutin is a New York-based artist and author exiled from Russia for his outspoken queer writing and activism. A third-generation writer and self-taught photographer, he was the first Russian granted political asylum in the US on the grounds of homophobic persecution. Informed by his bicultural dissident and refugee experience, Mogutin’s work examines the notions

of displacement and identity, pride and shame, devotion and disaffection, love and hate.

Mogutin is the author of seven books of writings in Russian, as well as four monographs of photography and two illustrated collections of poetry in English. He’s the winner of Andrei Bely Prize for poetry and the Tom of Finland Foundation Award for artistic achievement.