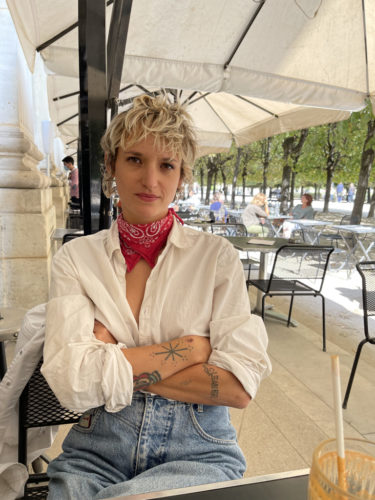 The revelation at this edition of the Festival de Cannes was absolutely Agathe Rousselle. “Titane”, written and directed by Julia Ducournau,  is the story of Alexia,  a dancer and serial killer who suffered a severe injury as a child from a car accident. In the hospital they inserted a titanium plate in her head. When she gets out of the hospital she avoids her not so loving parents and instead kisses their car passionately. As Alexia becomes an adult she is drawn to cars and performs as an unforgettable sexed-up showgirl at a motor show. Rousselle says this is a part of her personality that she had yet to explore. Preparation included intense training with an expert sports coach and a pole dancer who is also the choreographer for the sexed up showgirl scenes. The strenuous training lasted 2/3 months.  Rousselle claims she is so at ease now she could ‘twerk’ anywhere. Cameron Diaz might have had sex with a car in The Counselor but it was nothing compared to Rousselle’s automotive erotica. As Spike Lee, President of this edition of Cannes said: “It’s the first film ever where a Cadillac impregnated a woman. That blew my mind!” “That’s genius and craziness together.” Lee said.  Think about it, Titane is a story of a young woman who has sex with cars, kills without emotion and pretends to be a young boy and gets pregnant by a vintage car.

Among the many unforgettable scenes, these are some of the ones that are branded in my mind: the scene in the apartment where one of her male fans is trying to seduce her and she brutally murders him. Then there is the bathroom when she is ‘modifying’ her face. The scene reminded me of Robert DeNiro in Taxi Driver looking at his reflection in the mirror and repeating:  “You talking to me?” Rousselle says the most challenging scene for her was the fireman’s ball with the gabbers.  I’m not going to tell you the whole film because I urge you to go and see it. Topics go from the psychopathic behaviour of a serial killer to gender fluidity and importantly,  the woman is portrayed as the subject not the object,  hence the “female gaze”.

It all started when Agathe was discovered on Instagram, she went through four auditions before locking down the role which she was determined to get. Alexia was a nearly silent part where the dialogue was her body and her facial expressions. Imagine, your first acting job in a feature film where you play the lead and you get a standing ovation at the Festival de Cannes and the film wins the Palme d’Or, what a monstrously magical beginning. Success is hers and I’m impatient to see what comes next.