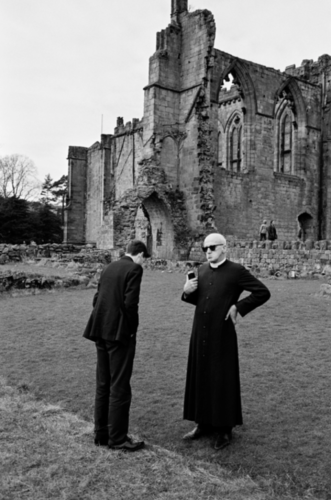 I am a huge fan of Martin Parr and have just been introduced to the work of Tony Ray-Jones as of today, so it is with great pleasure that I announce that as of August 26th, when Paris returns from holidays, the galerie Clémentine de la Féronnière will exhibit his work. The Clémentine de la Féronnière gallery presents In Black & White: Martin Parr & Tony Ray-Jones, an exhibition devoted to two emblematic figures of British photography. On the borderline between art and photojournalism, their black and white works contributed greatly to the evolution of photography in Great Britain between the end of the 1960s and the beginning of the 1980s.

It is no coincidence that Tony Ray-Jones and Martin Parr’s work is so closely aligned: although they never met, Parr’s discovery of Ray-Jones’ work in 1971 was one of the defining moments of his own career. As a first-year photography student at Manchester Polytechnic, he admired Ray-Jones’ talent for constructing complex scenes in a distinctly British setting. In 1975, Parr moved to Hebden Bridge, north-east of Manchester, where he documented the lives of the inhabitants of this small Yorkshire industrial town for five years. Now best known for his vibrant colour work, Parr began his first body of work in black and white, which already expressed a structured and casual eye.

Conversely, after photographing the United States in colour, Tony Ray-Jones returned to black and white on his return to England in 1966. Compared to Madison Avenue, everything is so grey,” he said in an interview. Inspired by the dynamism of the photographers he had worked with in New York, he travelled through the small towns and villages of Britain, with a particular interest in the coastline and its seaside resorts. Focusing on the customs, habits and leisure activities of the English, he travels to fairs, beauty contests and beaches in search of places where the rituals of the ordinary are enacted. His subjects and their interactions are superimposed in eccentric but sophisticated compositions, and his images are punctuated by a mischievousness that will be found in Martin Parr.

From 26 August to 20 November 2021, In Black & White: Martin Parr & Tony Ray-Jones highlights the relationship between these two photographers who continue to exert a major influence on British and international photography today.

The exhibition consists of vintage and modern prints by both artists.