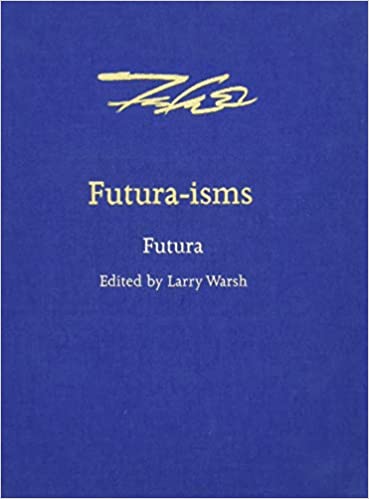 Having lived in New York City in the late 70’s and through out the 80’s,  the book of Futura-isms strikes home. I remember living in NYC with the birth of hip-hop and the Roxy and punk rock,  the origins of streetwear and street culture in the 70’s, late 80’s skateboarding culture, meeting my dear friend Steve Olson, not sited in this book but an icon in the skateboard culture. Futura-isms is a collection of essential quotations from this  artist. Futura is a living legend—a world-renowned painter, designer, and photographer who was a pioneer of graffiti art and New York City’s “subway school.” He  hung out with his friends, other young artists Jean-Michel Basquiat, Keith Haring, Kenny Scharf and Fab 5 Freddy among others. The book spans four decades collected through interviews and panel discussions and illuminates Futura’s thoughts on legal and illegal art, his influences, fellow artists, and the past, present, and future. He also offers colourful memories of his adventurous life—growing up in New York City, serving in the Navy, touring with The Clash—and reflects on how his experiences have shaped his art.

The book is a series of Futura-isms, here are a few:

The essence of what graffiti is ..is creating this identity and taking it to the public.

We were…slightly criminal. You know, it was a little bit of misdemeanor crimes,. I mean, we’re jumping over turnstiles; we’re breaking into subway tunnels. But I mean, I wasn’t a stick-up kid. I wasn’t a real thug. But we were considered thugs.

I understand that the Futura signature was once a graffiti tag on the walls of New York subways is now a brand. And I’m cool with that actually.

Let me please say I have an eternal flame for Agnes B. She was perhaps the most instrumental figure in getting me back into my artwork in the late eighties, providing me with a studio in which to work. More than a quarter century later she’s still supportive and without her presence my French connection wouldn’t be what it is.

Why is Jean-Michel Basquiat so successful? Well, he’s been dead a quarter century, no doubt. But when he was active, he knew about Cy Twombly, he knew about A.R. Penck. He knew that he was making these strokes that people were like, “Yo, my kid could do tat shit.” And I was like, “Yeah, maybe. But does she know what se’s doing?” And everyone thought Jean was like, “Oh, yeah…Blah, blah, blah” but no, he was mad smart. And he was paying homage and kind of throwing it back in their faces. And they loved it, right? And they loved it.