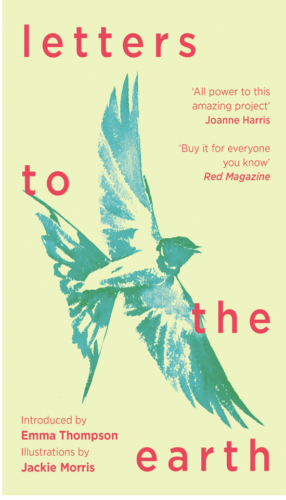 In a week when Bill Gates is pushing his ‘How to Avoid a Climate Disaster’ book  here comes something very different!

Harper Collins releases the Letters to the Earth: Writing to a Planet in Crisis paperback brings together over 100 letters – from children, parents, scientists, nurses, artists and politicians worldwide – in response to the combined crises of the climate and ecological emergency, and the coronavirus pandemic.

The letters are gathered into key themes: Love, Loss, Emergence, Hope and Action. Reflecting on the last year, Ben Okri writes that we are at the ‘beginning of an age of catastrophes’, and that we must listen to the earth’s ‘silent wisdom’ in order to live again. While Freya Mavor in her letter invites us to ‘Be brave. Be still. Be kind.’

“This book takes on the conversation we need to have in 2021,” said Kay Michael, co-editor of the book. “From a callout that resulted in over a 1000 letters flooding our inbox, it asks: How do we find the words to process what’s happening to the planet?

“From the letters we’ve seen it’s clear that people care and are ready to act. The response to the pandemic shows us that change is possible.”

Emma Thompson, writing in the forward for the Letters to the Earth anthology, commented: “The generation below mine is different. I feel it and I read it in these letters. Read this book and pass it on. Plugging in that energy will recharge even the most tired of batteries. Hand on your passion for the planet to the next person and never, ever give in.”

Anna Hope, Letters to the Earth co-editor and author says, ‘I can’t think of another volume that has such potential to move, challenge and console us in these times of crisis. The writing in Letters to the Earth – much of it from children – does not shy away from the terrifying scale of the threat we all face, and offers no easy answers, but there is wisdom in these words.’

Grace Pengelly, publisher, says, ‘These letters are in conversation, they talk to each other and conspire about something called hope. They document the global, intergenerational conversation about the future of our earth that we are all a part of. Collectively, they dare us to imagine a new story, one that rethinks and reimagines how we do everything.’

Ben Okri  – Ben is a Nigerian-born British poet, playwright and novelist, winner of the Booker Prize for Fiction in 1991. He has published eleven novels, four books of Short Stories, two collections of essays, and three volumes of poems. His books have won numerous international Prizes including the Commonwealth Writer’s Prize for Africa, the Paris Review Aga Khan Prize for Fiction, the Chianti Ruffino-Antico Fattore International Literary Prize, and the Premio Grinzane Cavour Prize. Recently, his Grenfell poem, on Channel Four YouTube, has received more than 6million visits on Facebook. ·

Freya Mavor,  Freya is a Scottish/Irish actor, writer and model living and working between France and the UK. She’s worked in film, theatre and television in two languages for over a decade. She is best known for playing Mini McGuinness in the E4 teen drama Skins, for which she was nominated for Best Actress at the TV Choice Awards 2012. She is at present working on a play which explores a relationship between two climate activists. · Anna Hope  – Co-Founder and Co-Editor of Letters to the Earth, and author of 3 novels, Wake, The Ballroom and Expectation. Wake was called ‘a master class in historical fiction’ by the Observer and shortlisted for New Writer of the Year at the National Book Awards in the UK. The Ballroom was a New York Times Editors’ Pick and won the Grand Prix des Lectrices ELLE award in 2018. Previously an actor, Anna is perhaps best known for her Doctor Who role of Novice Hame. ·

Farhana Yamin – internationally recognised environmental lawyer, author and activist and an Expert Adviser to the Climate Vulnerable Forum. Farhana has advised leaders and countries on climate negotiations law and strategy for 30 years. She was lead author for three assessment reports for the Intergovernmental Panel on Climate Change covering adaptation, mitigation and development policy issues. She is widely credited with getting the goal of net 0 emissions by mid-century into the Paris Agreement. She is also a climate activist and glued herself to Shell HQ in London to highlight their role in slowing climate action. She received recognition as No 2. on the BBC Woman’s Hour Power List 2020 with the judges describing her as a “powerhouse of climate justice”.