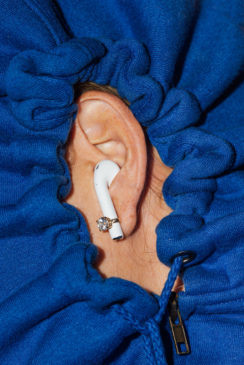 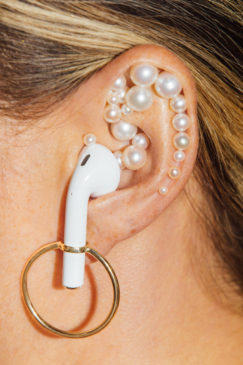 Jules Kim is an innovator, often copied…but then that is always how it goes when you pioneer new ideas. For more than 20 years Jules Kim has seamlessly been integrating street and club style with high fashion and fine jewelry. Adding to her incomparable perspective with unique collections such as her Gold Nipples© and Nail Rings©, which have been seen on titanic celebrities such as Cardi B, Beyonce and Erykah Badu, Jules recently launched the Earpod Jewelry Project. An exploration of the modernization of the human body and its extension to technology, the Earpod Jewelry Project embraces the pervasiveness of wireless ear pods through adornment.

“Athletes represent a unique breed of style influence, focus and dedication. My newest fine jewelry design concept is an elegant salute to training and pre-match fashion, while being connected to the sound of winning,” explains Jules Kim, founder of Bijules and the designer behind yet another copyrighted innovation in fine jewelry. “The Cage at West Fourth, which was one of the inspirations for the designs, draws an intense mix of athlete, attitude, and New York City tradition. In this collection, I have combined street style with on-court looks as seen in the ‘40th Summer’ series by photographer, Alessandro Simonetti.”

The wireless Bluetooth ear pod is ubiquitous for communication and personal entertainment, while timing obsolescence against the age-old telephone and headphones. In the simplicity and multiple style variations of these devices, there lacks a jewelry accoutrement to further identify the wearer as unique and individual. With the launch of the Earpod Jewelry Project, gold hoops and diamond studs can adorn city folk of any gender and background. The simple “Stud and Stack” design allows for wearers to stack jewels or leave as a single statement while securing the device’s in-ear position.

Using recycled jewelry materials from estate hoops, studs and repurposed wire, these fine jewelry pieces intend to highlight personal style and the ecological impact of fashion and luxury in general. Explains Jules, “Opulence can be expressed in design while respecting our duty to Mother Earth and its future.”

All Bijules jewelry and projects support local BIPOC artisans and makers. As stated by Jules, “It is important that the work of BIPOC continue to further tradition and develop new heirloom stories.”