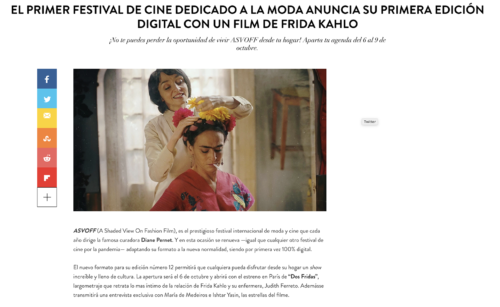 Ishtar Yasin’ film “Dos Fridas” has its Paris Premiere tonight for the Opening of ASVOFF12 on the A Shaded View on Fashion Film Channel on FNL Network. Ishtar Yasin created Asarte Films from San Jose, Costa Rica in 1998. She was born in Moscow, Russia to an Iraqi father and a Chilean-Costa Rican mother.

Her first film, “El Camino,” premiered at the 2008 Berlinale. It would later go on to be shown at around thirty film festivals (including Tallinn Black Nights) and got more than a dozen international awards (including the Special Jury Prize at the IFF in Freiburg, the Fipresci Award in Guadalajara, the Best Latin American Film Award in Santiago, Chile and the Tato Miller Award at Mar del Plata).

“Dos Fridas” is based on a true story

Watch ASVOFF12 on the Shaded View on Fashion Channel on FNL Network https://linktr.ee/fnlnetwork