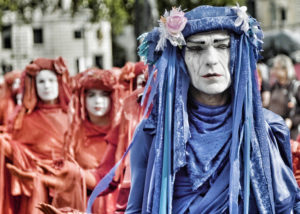 Oscar winning UK production company PASSION PICTURES and multi award-winning documentary filmmaker, SASHA SNOW, and sustainability pioneer Thomas Ermacora, will release the “The Troublemaker”, a  2-year independent production about our collective response to the climate crisis.
As a society, and as individuals, we have always been defined by how we react in the face of a crisis.  This is the archetypal story played out on a global scale, presenting the opportunity for self-discovery if we are prepared to face up to the existential threat.
‘The Troublemaker’ scratches the niggling itch that is lurking in many of our brains about the extinction of planetary systems that seems to be going on all around us, and the dawning realisation that something has to be done.
Ultimately the film poses a simple question: with the consensus of informed opinion declaring a ‘climate emergency’, is it morally acceptable to sit back and do nothing?

I don’t want my children to look back and think I led a frivolous life and then just abandoned them.  I want them to know I did everything I possibly could.” – Sylvia Dell

“The essence of what is human is the ability to make a decision, a conscious decision on what is right in life, regardless of the consequences.”  – Roger Hallam (XR Co-Founder)