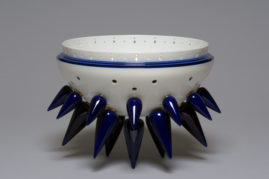 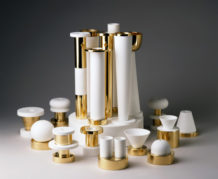 The exhibition “The Object, the Artist and the Designer” will be presented at the Galerie de Sèvres in Paris from September 3 to October 10, 2020,  both the notion of design in the strict sense of the term and the artists’ approach to the object are questioned.

Icons of Sèvres production, such as Ettore Sottsass’s spectacular white and gold tableware or Borek Sipek’s Sunday Cup, stand alongside more contemporary pieces by the designer Matali Crasset and lesser-known designers invited early in their careers, such as Sam Baron and more recently Arthur Hoffner.

The first floor of the gallery is dedicated to artists invited to Sèvres who have produced “functional” objects when they were part of an artist’s approach rather than a designer’s. Some of these pieces may also have become icons at Sèvres, such as Christian Renonciat’s rolled vase or Adrian Saxe’s teapot.

The Manufacture Sèvres has been the source for great creation for nearly three centuries. Artists and craftsmen use the raw material to create the perfect, dreamlike shape and have access to enamels chosen from among the 1000 references of the Sèvres palette.  Sèvres, designers and artists translate the material into objects of desire and contemplation.Ettore Sottsass, Surtout blanc, 1994-1995, biscuit of soft porcelain and gold © Gérard Jonca / Sèvres – Manufacture et Musée nationaux.