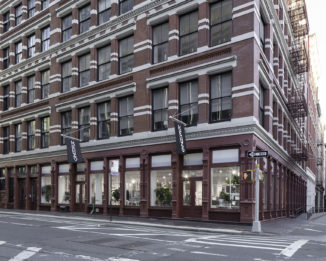 KENZO just announced their first inaugural US flagship in New York CIty,the first KENZO boutique in the world designed by Creative Director Felipe Oliveira Baptista. The shop is located on the corner of Grand and Mercer streets inside a historic cast-iron facade building. Inside you will find white metal scaffoldings which are reflected throughout the space’s floor to ceiling mirrors serving as a launchpad for the House’s newest collections. There are revolving artistic installations debuting with a vintage television presentation and complimented by 1970’s leather furniture and geometric plexiglass displays. Plants and vegetation punctuate the metal structures. The idea is to have continuous artistic installations and community gatherings.

The flagship opened today, it’s a strange time in New York and in the world but we wish him great success.