Professor Jane Shattuc discusses The Bitter Tears of Petra von Kant (Germany 1972, Rainer Werner Fassbinder). When I was a designer I’d always dreamed of doing the costumes for Fassbinder. He died before I had the opportunity however my first job in Paris as a costume designer for Golem l’Esprit d’Exile I dressed the two lead characters and one was none other than Hanna Schygulla. She was amazing and it made a not so amazing job a treasure. When I walked into her apartment in le Marais the first thing you saw was a big black and white portrait of Fassbinder. I found Jane’s discussion quite interesting and have always been intrigued by this film. I remember forcing a friend of mine to sit through it in a cinema in German with French sub-titles, neither language was easy for her and most of the film takes place in a closed space. I think my joy was her torture. I thought the costumes were like Cecil B. DeMille on acid.

The Bitter Tears of Petra von Kant (German: Die bitteren Tränen der Petra von Kant) is a 1972 German film directed by Rainer Werner Fassbinder, based on his own play. The film has an all-female cast, and it is set in the home of the narcissistic protagonist Petra von Kant.[1] It follows the changing dynamics in her relationships with the other women. Petra’s story is told in a theater-like fashion in four different acts, each depicting the states of mind of the main character hinted visually by her clothes and hair. The film was entered into the 22nd Berlin International Film Festival.

Petra von Kant (Carstensen) is a prominent fashion designer based in Bremen. The film is almost totally restricted to her apartment’s bedroom, decorated by a huge reproduction of Poussin’s Midas and Bacchus (c.1630), which depicts naked and partially clothed men and women. The room also contains numerous life-size mannequins for her work, though only her assistant Marlene (Hermann) is shown using them.

Petra’s marriages have ended in death or divorce. Her first husband Pierre was a great love, who died in a car accident while Petra was pregnant; the second began the same way, but ended in disgust. Petra lives with Marlene, another designer, whom she treats as a slave, and this relationship reveals Petra’s sadistic, codependent tendencies. 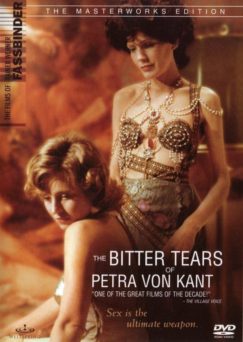 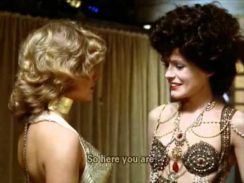 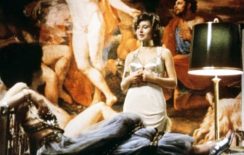