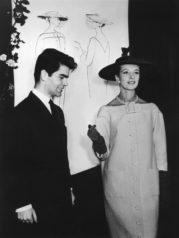 Design student from Hamburg Karl Lagerfeld, only sixteen years old (twenty-one following other sources), with a model presenting a cocktail coat. Lagerfeld won the competition of the International Woll Secretariat in the section of coats in 1954. | usage worldwide (Photo by dpa/picture alliance via Getty Images) 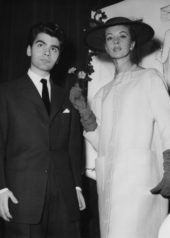 German fashion designer Karl Lagerfeld after winning the coats category in a design competition sponsored by the International Wool Secretariat, Paris, 14th December 1954. With him is a model wearing his design. The competition win led to Lagerfeld being hired as assistant to Pierre Balmain. (Photo by Keystone/Hulton Archive/Getty Images)

The Key Judges for the 2020 Woolmark Prize were revealed today. They include:

The Karl Lagerfeld Award for Innovation is in honour of the late icon and Woolmark Prize alumnus. Enjoy the photos of Karl from the time he won the award in 1954. The award will be presented by Carine Roitfeld, Editor-in-Chief, CR Book. “What an honour to be the first person to award the Karl Lagerfeld Award for Innovation,” says Carine Roitfeld. “Karl was always looking for new talent – a rare, encouraging force, instrumental in the development of many young designers. In today’s global fashion business, discovering, nurturing, and providing a platform of recognition for innovating creatives is absolutely crucial.”