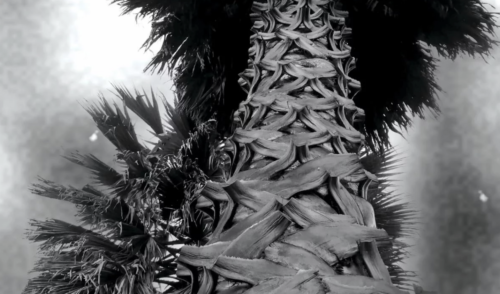 Jessica Mitrani won the Grand Prize at ASVOFF 5 and prior to that she submitted films that were in YWITW the fashion film festival I did in 2006 with a collaborator. Needless to say I’ve been following her career ever since.

OCDChinatown is proud to present the US premiere of a new video by Colombian artist Jessica Mitrani, To Reincarnate as a Palm Tree (2019). Deftly weaving together appropriated film and video clips, graphics, music, and text, Mitrani takes the viewer on a hypnotic odyssey through histories both personal and expansive. This five-minute fever-dream collage of idols, influences, and inspirations—including her father, samba singer Elza Soares, artist-theorist Kodwo Eshun, and science-fiction writer Octavia Butler—evolved out of Mitrani’s experiences with Iboga, an entheogenic root bark, in Gabon. Feminist, ecological, and speculative, To Reincarnate as a Palm Tree offers a powerful conception of a proliferating cosmic consciousness, an attempt to acknowledge and explore the multiple viewpoints that inform her own diasporic subjectivity. Mitrani’s vision is fluid and transversal, the product of interlocking hemispheres outside the Euro-North American axis.

The video was initially commissioned for the exhibition “Universos Desdoblados” (Unfolding Universes) as part of the 45th Salón Nacional de Artistas in Bogotá, Colombia. The exhibition presented a range of work that imagined alternate realities, suppressed histories, and possible futures. In this context, Mitrani was drawn to exploring the rich cultural legacy of Afrofuturism. The artist explains:

“I was born in Barranquilla, on the Atlantic coast of Colombia. My own family came over from Morocco, Turkey, and Romania—Jews fleeing persecution. But I grew up surrounded by Afro-Caribbean culture, and I came to understand this as a territory of visceral inspiration and integration, both direct and indirect.

My interest in Afrofuturism as an expression of overlapping temporalities is inspired by my transformative encounters with the Iboga plant. The myth––or perhaps not-so-science fiction––is that the root was planted by beings from the stars, in order to trigger deeper cosmic awakenings when the time was ripe.

My hope is always to be open, to be permeable. To encounter without appropriating, to listen and to learn, and to share what I have learned.”