Ricardo Andrez presented a confident and youthful collection during the last edition of MODALISBOA, focusing on pure color, revamped sportswear and arty prints, which he used generously throughout the show. Picking red, black and gray, he delivered his own version of the classic tie-dye to come up with dynamic and strong pieces that were wearable, but also statement styles. Andrez did not shy away from full colors either, which he strategically used on simpler pieces, such as a sensual, lingerie-inspired slip dress in blue silk or a structured metal trimmed jumpsuit in light pink cotton. It was nice to see the designer refresh sportswear staples to give them his personal twist and add a new impact: hoodies, jeans jackets and oversize tops looked fresh and experimental, while giant bows adorned sporty pieces, possibly a wink to Haute Couture and the current Lacroix revival. Andrez designed clothes that could work well on a male or female form, regardless of size and body type. His double-breasted trench, which was worn by a woman, would look great on a guy as well. 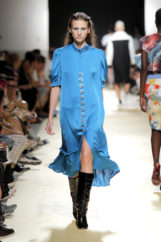 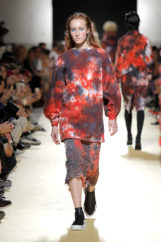 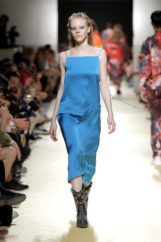