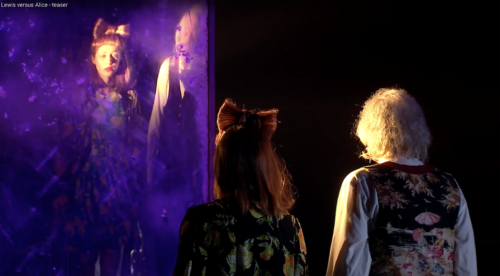 If you have not seen the play yet in Paris, there  are still six more performances left of Lewis Versus Alice at the  Theatre Gerard Philipe http://www.theatregerardphilipe.com/cdn/. The last is on October 13th and please bring your children. There were plenty there when I saw the play earlier last week.  If you cannot make it in Paris there is another opportunity to see the play at the festival of Avignon https://www.festival-avignon.com/en/shows/2019/lewis-versus-alice.

Lewis Versus Alice is directed by Macha Makeïeff  and is a play based on the writings of Lewis Carroll who was an eccentric clergyman from Oxford, a photographer, a logician and a spiritualist. We all know his work through  Alice in Wonderland. In Lewis versus Alice Macha Makeïeff dives into the fantastic universe of the great writer to explore the psyche of this poet that rebelled against Victorian conventions. Lewis Carroll was born in 1832 and grew up in a family with 11 children, with an ecclesiastic for a father, during the strict time that was Victorian England. He dedicated his life to mathematics and to the writing of fantastic fictions, as stated above, the most famous of which remains Alice in Wonderland.

His reverie shows us the contradictions of a troubled world where everything is in flux and can reverse itself with humour and fragility. Because “in Lewis Carroll’s work everything is word, and only word, there’s nothing dramatic about it, it’s a like a conversation in a dream. It’s ‘said’ and then it’s gone…” The play is accompanied by gothic pop music, sounds and voices that seem to come from another world, the show makes the audience face the supernatural: a set and what sits behind, characters that disappear, half-light and shards of dreams, tongue twisters in French and English… Worlds atop worlds mirroring each other, like Lewis-Alice, who loved nothing more than to defy the cruelty of reality.

A writer, plastic artist, and director of La Criée, Centre dramatique national de Marseille, Macha Makeïeff loves to explore the pleasure of the eyes as much as that of words and bodies. At the theatre and the opera, and in museums, she creates sets and costumes, and acts as director. Lewis Carroll was the ideal author to venture into the pleasure brought by the contradictions of language and to explore dreams and the supernatural. During the Festival d’Avignon, Macha Makeïeff will present, at the Maison Jean Vilar, Spoilsport, Curious Collections and Disquieting Things, an echo to the creation of Lewis versus Alice.