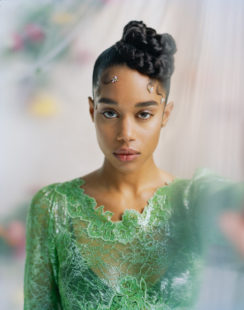 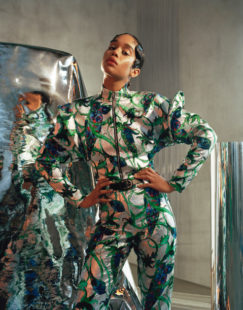 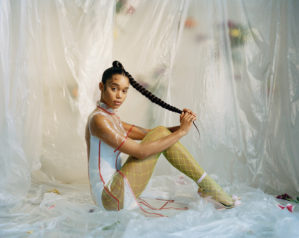 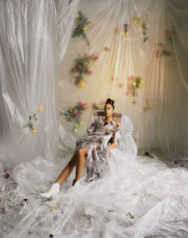 Mary Rozzi is the Californian, London based photographer behind the magazine The September Issues. The September issues (the independently published, biannual feminist print magazine) unveils its sister digital version of the magazine today with the American actress/model Laura Harrier as its cover star and in an interview.

The September Issues is the first and only magazine that is completely made by women and is a community of creatives that reflects the diversity and power of global femininity.

I had a chance to interview Mary Rozzi, the founder of the magazine and on supporting the “Power of Femme” and why she decided to launch the print version of the magazine and then 3 issues later the online site, which will be providing  an important platform to support digital artists and female directors.

DP: The September Issues reminds me of a film on Anna Wintour, why did you choose that title?
MR: We’re reinventing what a fashion magazine can be. As a magazine we’re working to subvert traditional media, while building on the foundation of what came before us. The title itself is a play on words–we’re reimagining  the Vogue September Issue, while highlighting real issues that women face. We want to make fashion a feminist issue.
DP: As a photographer and an editor, why did you decide to go from print to digital? Are you equally happy with digital images as with print?
MR: We wanted to expand our support of artists. With an additional digital component, we’re able to showcase deserving talents, and those whose medium exists beyond print.
DP: Of course I’m aware of the lack of female directors at awards ceremonies like Cannes or the Oscars. I assume that is one reason you have dedicated the magazine to support women in the digital and film world? Do you think you will always keep women as your focus?
MR: Yes. Gender disparity in film is well documented, and a conversation we need to continue to have. We want to be as open as possible. It’s more about diversity in representation, and shifting notions of masculinity and femininity.
DP: Did you experience anything in your career that made this issue so important to you important enough to put your focus only on women?
MR: I started this magazine selfishly, and for two reasons. I felt like I was losing my voice as an artist, and because it has been such a struggle being a woman in a male dominated field for so long. I realized that it was an underlying part of my career, but it was never something that I voiced because I was just fighting the fight and living in it.
DP: The images are strong and sensual, in fact, I love them, what was it like working with Laura Harrier?
MR: Laura has a grace and elegance to her that is very rare. The magazine is special because I want the people we work with to have a powerful experience in a safe space, and for them to walk away having gained something authentic. We asked Laura to consider how she wanted to collaborate with us. She was incredibly open, and excited to be a part of something unique. It sounds cheesy, but working with her was a dream.
DP: What women in the digital arts and film world have influenced you the most up to now?
MR: Joan Jonas, who we featured in the magazine, and Jane Campion for digital artists. I pull a lot of my inspiration from performance artists, dancers, and poets, like Harryette Mullen, Vanessa Beecroft, and Pina Bausch.
DP: Do you also think that men will never enter into your publication either as a subject or as an employee? Why is that so important to you?
MR: Definitely. This is not about being exclusionary, but about giving those who are underrepresented a voice and a platform. The only way to do that is to consider the full spectrum of masculinity and femininity. It’s not about gender—it’s about point of view. We’re focusing on the feminine voice right now because it’s been missing from mainstream media, and has been for a long time. Watch and see how we will develop, because we have a lot of ideas about how to push the conversation further.
Later,
Diane