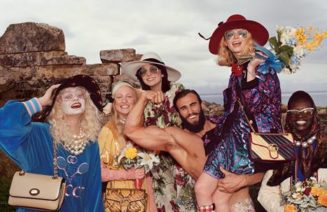 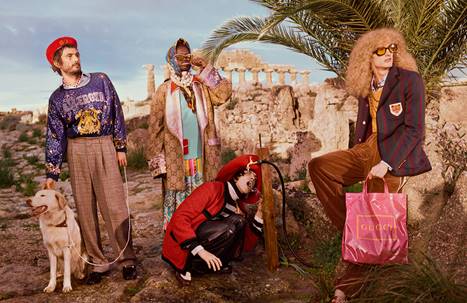 Under Gucci’s Creative Director Alessandro Michele, Glen Luchford took a troupe of eclectric bohemians to the ruins of the temples of the Selinunte Archaeological Park in Sicily for the Gucci Pre-Fall 2019 advertising campaign. Selinunte was an ancient Greek city founded in the second half of the 7th century BC on the south-western coast of Sicily and features nine temples on an acropolis and three outside the walls on the eastern hill including the Temple of Hera.

The campaign is a vision of Alessandro Michele re-imagining this mythical site suspended in time, a land where diversities coexist harmoniously. Can we bring that back into our lives please…In Gucci’s modern-day version of a symposium, friends and lovers meet to discuss philosophical and political issues, read poems, play music and sport, and dance together. Capturing Gucci’s magpie method of cultural juxtaposition, the youths are drawn from the counter-cultural groups typically seen on Venice Beach in California—hardcore punks, rollerbladers, bodybuilders and surfers.

The Gucci App brings the Pre-Fall 2019 campaign to life for users. A digital photo booth will enable users to place themselves in the setting of the advertising campaign on screen. The App will also contain exclusive, unseen behind-the-scenes images and video clips from the shoot. A special story about the campaign can be unlocked when users who have downloaded the App are near a Gucci store. Users can also scan dedicated QR codes on Gucci store windows to access this special content.