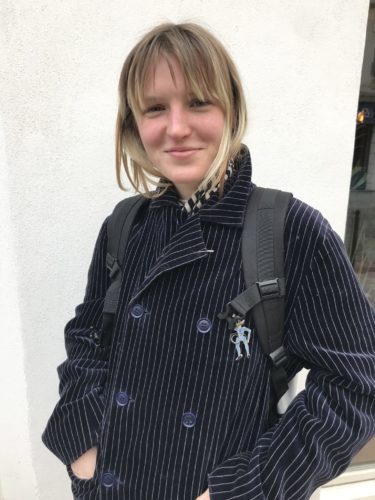 I sat down with Edie Ashley to talk about her upcoming collection Edie x BOLT which will be released this summer. Edie is 22 and a recent graduate from Kingston in the UK. BOLT is a range of motorcycle clothing curated by BOLT. All brands stocked at BOLT are owned by motorcycle riders who are submersed in the motorcycle culture. On her final degree show in June Ashley invited 10 people to her final degree show and only one person came, Andrew who runs BOLT in the UK. He saw it and liked it and asked for a meeting with her and then proposed she design his first wholesale collection. They sat down and started speaking about things they both liked and the vibe they were going for at the moment. They came up with almost too many things. The collection was designed in September. They have been developing it since then, slow fashion. No stress, just great energy. It happened very organically with a lot of excitement and happiness. All the fabrics have been gathered from factories around the UK, rolls of material no longer wanted by that factory and they repurpose for the collection. You’ll have 25 garments in that fabric and when that is done it is done so it is a limited edition and then they move on to another textile. Edie and BOLT have so many plans and a great relationship and the whole team is inspired by each other. “This is just the beginning of something massive.” said Edie Ashley.

Keep watching, I’ll show you some of her work here very soon.