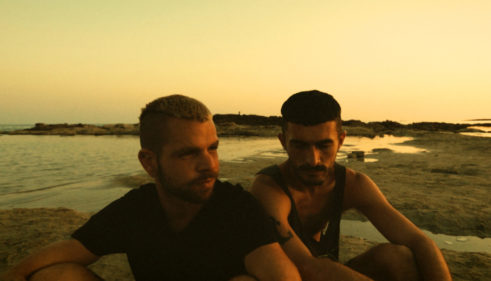 Hosted by the breathtaking Greek performer A MAN TO PET.

Convinced a holiday away from the city will help mend their rocky relationship, two young men hitchhike to a remote seaside enclave, filling their days and nights with passionate lovemaking in the crystal clear water and making excursions into the rocky outcrops for sensuous alone time under the sun.

A narrator articulates their inner thoughts as they frolic in the sand and surf, but even in this golden paradise, doubts they left behind catch up to them, leading to an emotionally charged confrontation that will either re- sult in the crumbling of their already fragile relationship, or an opportunity to once again discover the spark that united them in the first place. HE LOVES ME, frank in its depiction of sex, is an exploration of the unconventional nature of love and its ability to survive against the odds.

About The Queer Archive
The Queer Archive launched in 2013 and is an Athens based/ internationally operating creative platform working with an eclectic list of local and international artists, cultural managers and institutions for the communication of provocative and powerful artistic ideas. Through our activity, which includes film production, art exhibitions, workshops, parties and film screenings we aim to highlight talent, support progressive thoughts, encourage intellectual debate and create new outlets of communication between communities.

About Konstantinos Menelaou
Konstantinos Menelaou is a filmmaker and a curator based in Athens, Greece. He has been using super-8 and video formats to create experimental short films, as well as fashion shorts and documentaries. He has shown his work around the world in film festivals and art galleries and he has recently completed his two first feature films, which travel the festivals. His has worked as a curator for Fringe Film and Arts Fest in London and ASVOF festival in Paris and he is the director of The Queer Archive, a creative platform oper- ating internationally since 2013.