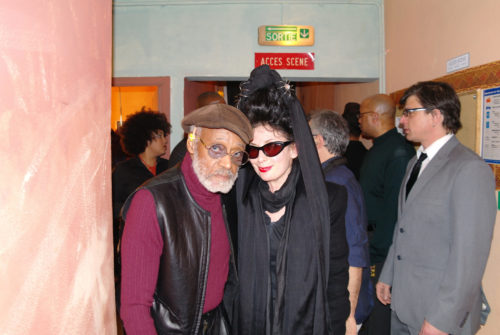 I received a request for an interview for a school report and I was struck by the last name…Van Peebles. After answering the questions I could not resist asking if Marie Marguerite was any relation to Melvin Van Peebles… In fact, she said, he’s my father, I’m the youngest one. I remember meeting him when my friend Satch Hoyt was playing with  Burnt Sugar, the opening act for Melvin Van Peebles.

Satch asked me to come to the dressing room after the concert to meet Melvin as I told Satch how much I admired Van Peebles work ever since seeing Sweet Sweetback and what an impact that film had made on me and how much I would love to have Melvin on my ASVOFF jury. Melvin was in the process of getting dressed or undressed, the man was 79 with a body like he was 35, he had a six pack, I could not help but notice. Anyway he gave me his phone number in Paris. I called him the next day we had a long talk but in the end he said he was a bastard and he could easily not show up. I did not pursue it as I’ve never seen the point of forcing an issue. I thought that he was perfect for ASVOFF because the fashion in his films was extremely important and so good. Anyway I was happy that I had the opportunity to meet someone that I held in such high esteem for so many years.