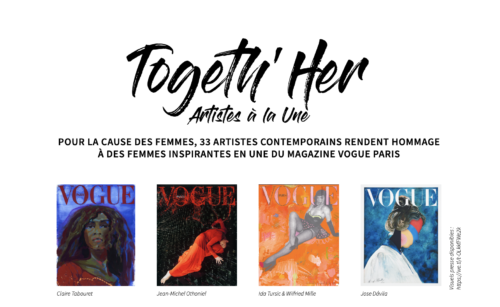 From the 19-23rd February La Monnaie de Paris welcomes an exhibition titled “Artistes a la Une, Togeth’her”, which is organised to support programs in favour of equality for the sexes. The project gave ‘carte blanche’ to 33 artists, both women and men, around the globe to imagine a Paris Vogue cover featuring the woman that inspired them. The 31 women represented here have had a strong impact shaping the world as we see it. Their works will be on exhibit in the rooms at la Monnaie de Paris and sold at auction house Christie’s giving the funds to support Comite ONU Femmes France.

David-Herve Boutin is the curator of this project, Camille Morineau is the artistic director whose impulse is to support female artists and make them more visible in both events and exhibitions. The exhibition will be free to the public and there will be a catalogue published by Vogue which will be distributed to subscribers of Vogue in Paris.