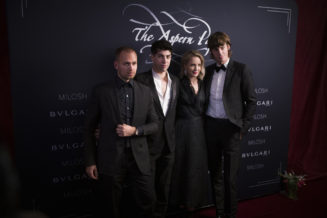 I am delighted to tell you about my most recent visit to Prague for the screening of Julien Landais’ first feature film, The Aspern Papers The film is based on a novel by Henry James and takes place in Venice in the late 19th century. The story is about obsession and manipulation where Jonathan Rhys Meyers’ character plays an American editor who is obsessed with the romantic poet Jeffrey Aspern (Jon Kortajarena) and his wild romantic life. His mission is to get his hands on the letters that Aspern wrote to his beautiful lover and muse, Juliana Bordereau (Vanessa Redgrave) who he discovers is still alive. Now you have the basis of the story, for the rest, go see the film.

Milosh Harajda was in Venice for the special screening which was a tribute to Vanessa Redgrave, one of the stars in Julien Landais’ film. Harajda decided to bring The Aspern Papers to Prague where it was screened at the  Royal Theatre and to my great pleasure, I was an invited guest to the Prague event. Apart from Vanessa Regrave the film featured Jonathan Rhys Meyers, Joely Richardson, Jon Kortajarena, Nicolas Hau, Alice Aufray, Poppy Delevingne and Morgane Polanski among others. The screening was produced by BVLGARI and MILOSH and the director Julien Landais and the actor Nicolas Hau were on hand with BVLGARI’S Silvia Patrova and Milosh Harajda to present the film. The jewels of BVLGARI were highlighted in the film and we had the opportunity to see the exact pieces from the film close up in cases bordering the screening room. A Q & A followed the screening and then the after party.