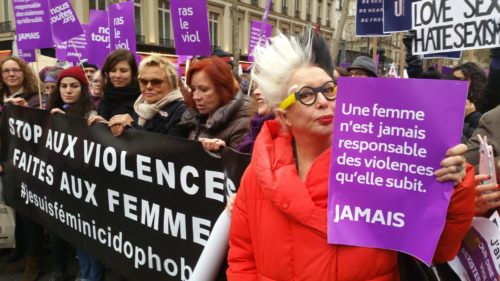 French feminists have set aside November 24th as a day for a nationwide march to protest violence against women. Protesters are hoping that last-minute blockades staged by the country’s “yellow vests” (anti-diesel tax movement) doesn’t eclipse the women’s message. The protest takes last year’s #MeToo campaign one step further and calls attention to sexist and sexual violence against women.

According to the French government figures, some 225,000 women are victim to domestic violence each year. Femicide or the killing of a woman because of her gender, accounts for a fifth of all murders in the country. Authorities say that more than 250 women are raped in France every day and as many as one in three have been sexually assaulted or harassed in their workplace at least once.

The idea is “to make society more aware of the extent of sexist and sexual violence”, Madeline Da Silva, one of the organisers, told FRANCE 24. “[The aim] is to send an electric shock through society so that it puts its foot down and says, ‘Stop’.”

“Thousands of people are expected in Paris and we have 100 local networks [who have committed] and 50 marches in France,” she said.

The movement has won strong backing from several French celebrities, including writers Marie Darrieussecq and Annie Ernaux as well as actors Philippe Torreton and Karine Viard. On Friday, unions representing more than 400 French female journalists, teachers, lawyers and caregivers also threw their weight behind the campaign.