Lidija Kolovrat was in a relaxed mood with her last show, underlining color and comfort as her main intentions. Shapes were often oversize and away from the body, such as a strapless chiffon dress adorned with sequined stripes or an elegant shirt dress featuring a subdued ombré pattern. Wearing surrealistic sandals -which looked like colorful fish- and boxy jackets trimmed with fringing that recalled fishbones, Kolovrat’s models were hybrid creatures, hovering between Earth and Sea. Of course, the city of Lisbon has a powerful connection to the sea, and happens to be the only European capital with Atlantic beaches. This perhaps explained why the designer’s male models were in easy shorts and baggy shirts with large cutouts, ready to remove their clothes to go for a swim. Breezy blues and sunset oranges punctuated the color palette, giving a mellow and poetic vibe to the collection. This felt like a very Portuguese show, with its charming saudade and melancholic beauty. 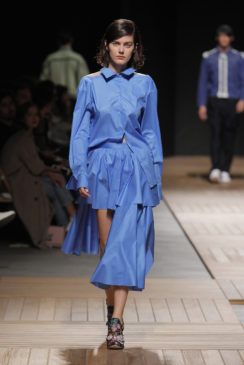 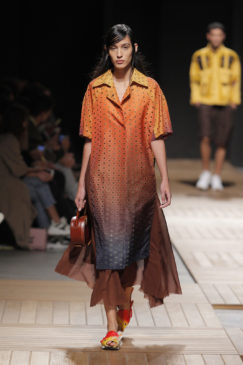