The collection French designer Julien Dossena showed for Paco Rabanne in Paris felt like a breakthrough moment, exciting the audience with its clever mix of opulence and effortlessness. Dossena had mysticism and spirituality in mind, conjuring up New Age gypsies with a sophisticated taste. There was, however, nothing literal in his clothes, which beautifully blended botanical prints, fragile lace and mannish tailoring, giving a certain nonchalance to his silhouette. India was definitely in the air, but Dossena smartly translated that reference with layering effects and colored chain mail, one of the house’s key trademarks. If also felt like he was freeing himself from the strict codes of the brand, a process which revealed his talents as a designer. The preciousness of the collection was mostly apparent in the choice of textiles, from lavish silver brocade for a structured pantsuit to flimsy lurex knits and printed silks, underlining the marriage of East and West. If Prince of Wales checks evoked the pose of dandyism, the show was nevertheless rooted in urban life, as illustrated by the choice of Peter Saville graphics printed on tie-dye t-shirts, ‘Lose Yourself’ being the most memorable one. These two words ended up summarizing Dossena’s attitude this season: he let go a little and conquered a lot. 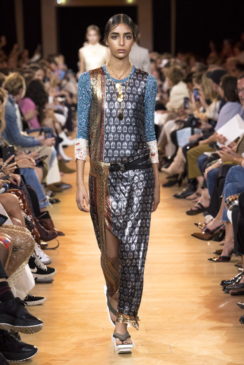 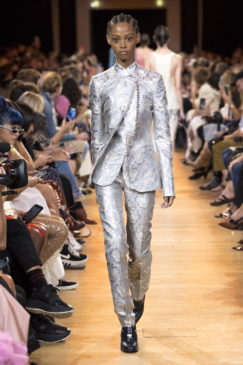