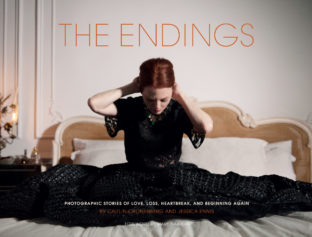 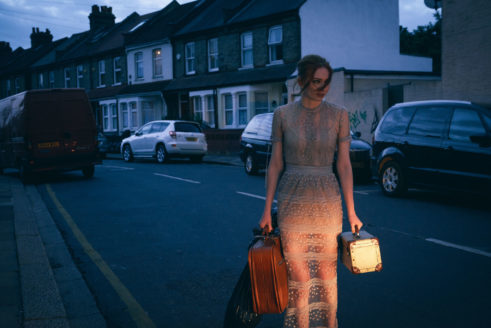 Caitlin Cronenberg and Jessica Ennis release their photographic book: The Endings, Photographic Stories of Love, Loss, Heartbreak and Beginning Again on September 4th. The stories feature talent including Julianne Moore, Gugu Mbatha-Raw,  Nina Dobrev, Imogen Poots, Keira Knightly, Juno Temple, Jennifer Jason Leigh and Danielle Brooks amongst many others.   Many of the stories were based on real life experiences from the talent or the authors themselves and most of the book was shot in London. I had a chance to sit down with Caitlin Cronenberg and Jessica Ennis.

DP: I take it that the two of you approached the project much like one would storyboard a film. As the actors in your photographs are not telling ‘their’ personal stories, how did you go about choosing your subjects and also the stories that they would act out?

CC JE: The stories were originally inspired by our personal breakups and stories told to us by our female friends. Over time as the project grew conversations around breakups became  very much the norm for us. From the crew on set to the actors we worked with everyone had a story to tell and many of these stories made it into the book. The last story in the book, Sofia Boutella, was a story director, Mary Harron, had told us when we first met to discuss her writing our foreword. It was the story of a woman cutting up her ex lover’s clothing into tiny pieces after a betrayal. We loved the story and thought it make for such an interesting visual we added it as our final shoot.

The process of casting the actor for the appropriate story was very similar to film. We tried to find the best actor for the role. In some cases we had the talent first but even in those instances we worked to craft a story that we felt would really showcase the talent of that individual. As the project continued and our desire to diversify the range of stories increased it was essential that the actors cast in each role could really bring to life to the story. Some of the stories relied heavily on subtle gestures and minor insinuations.

Did the two of you develop the story lines together and concept for the locations and props or how did you divide the work, aside from photographer /art director?

The two of us worked together to create all the stories you see in The Endings. Frankly, if we added up all the hours we’ve spent on the phone discussing these stories it would be astronomical! We both directed the actors on set and produced the shoots together. In terms of the overall visual style that’s something we developed together as well. Obviously given our individual skill sets Jessica was the one that typically put together mood boards, designed the sets and in some cases sourced the individual props while Caitlin worked in creating the lighting setups and physically shooting the photos and doing the post work. However both of us were very heavily involved in the majority of the decisions made so even if one of us was taking the lead in our individual area of expertise the other partner was never too far away. For the most part are aesthetic has always been very much in line so we did reach a point where the we could almost anticipate the others reaction.

I understand that the participants in the particular story lines drew upon some personal experiences to bring more impact to the images, can you identify any particular stories from any of the subjects?

Caitlin, obviously you grew up with cinema and your photographs are very cinematic, is this a direction that you would like to go towards?

I don’t feel a real desire to direct feature films at this time. I love directing still shoots and short films and music videos for now. Taking on projects that feel more like moving photoshoots than anything else feels like the right fit for me. My real love is capturing the specific true moments and giving the audience a still frame to focus on and think about. I love when still images feel like film. You can do so much with a single frame. It can tell an entire story and there is a power in that.

I find certain stories have more of an emotional impact than others, for instance in To All the Men Who Left Me here featuring Noomi Rapace, What is most upsetting about this story is that not a single ending that has brought her to this place but rather an overall feeling that she is unlucky in love. She has been wounded by many men and has given up in a sense. We all get our hearts broken and with each breakup it can certainly chip away at our confidence and our ability to move forward and feel love again without fear, but the true sadness here is the loss of hope. You get the feeling she has reached her final breaking point. He’s Due Home by Supper featuring Gemma Jones, 57 East 7th Street Danielle Brooks, Past the Lilacs, in the Clearing, Meet Me When it’s Dark featuring Bel Powley, at first when I looked at that particular series I thought it was more about beautiful aesthetics then sharing an emotion but the longer you look at it the more of an impact it has. What are your thoughts on that?

Re Bel shoot – Yes this story is probably one of the more emotional stories in the book as it deals with the loss of a childhood friend. This is an ending that will presumably stay with this character throughout her life. While in many of the stories we touch on grief and mourning this story is about death. It is the final Ending. Are in Your Eyes featuring Christine Horne I found very powerful, is she an actress? The book features 28 actors. We only used actors. Christine was the first shoot we did. She trusted us with this project before we even knew what it was going to turn into. She is a Toronto-based actress whose focus is theatre. She’s been in many features, but she is a passionate and amazing theatre actress. not, she should be as she was very convincing as was Stay High featuring Juno Temple.. I also really found Loneliness was a Place I didn’t want to go back to featuring Keira Knightley succeeded in conveying what felt like an authentic emotion and the final one Point of No Return featuring Sofia Boutella.

Do you two have any stories to tell about any that I mentioned above?

The Juno Temple shoot was 17 hours long. As a team, we travelled from apartment to apartment in Brooklyn and put her in these situations with different men. But because we were all together it felt like we were all living it together. It was a powerful shoot and a true bonding experience for all of us.

Shooting with Keira was incredible, because her shoot was quite dark, and she was so cheerful and fun on set. She made it the most amazing experience and then when it came time to shoot, she would immediately transform into this perfect, troubled character. It was very interesting for us to see how some actors preferred to stay in character for the duration of the shoot, and some liked to slip in and out of character over the course of the day. So fascinating to see their different processes.

Which series had the strongest emotional impact on you individually or together?

Jessica – The Gemma Jones story was inspired by my own grandmother and her struggles with Dementia. The story in the book is about a woman that waits longingly for her lover to return. Despite having lost him decades before the moment the story actually takes place her memory we has reverted back to that time in her life, so she waits. Gemma’s performance was incredible. She embodied the character and when I look at the images I can feel this woman’s pain and confusion. The story is really about love in many ways.

Caitlin – I felt Noomi’s shoot was the most emotional for me. Not because I could actually relate to the story, but because she embodied the character so completely. She made me weep behind the lens while we were shooting.

How did you go about sourcing the locations and the props. I know that you put personal items in the sets I imagine to trigger emotions.

In terms of process we always started with the concept and then looked to create the world to match the story. The obvious challenge is we didn’t have the same resources as a large scale production would so we had to be very creative with our sets. We did a lot of sourcing online and from Goodwill and several other local antique stores. We also borrowed anything we could. The thing about low budget filmmaking (or bookmaking) is you really have to ask everyone you know for favours. The number of people that allowed us to shoot in their homes is was also truly amazing. We wanted to make the sets feel as real as possible, so it helped our subjects to have real props that they could interact with.

Yes some of the items used were our personal items. Some fun examples:

The boyfriend’s belongings in the 11:11 story we see being burned were actually from Jess’s real ex boyfriend boxes that she kept up at her parents place. After the shoot we all sat around and looked through the items (that we didn’t burn).

The Malin Akerman story was shot in Jessica’s real closet. We gave Malin a few personal items one of which was an old childhood music box. Malin was moved to tears. It must have triggered something.

How did you keep them cinematic as opposed to fashion shoots?

It’s a difficult to walk the line with fashion sometimes. To have the photos feel authentic, real, cinematic without coming across too staged and like a fashion shoot. It was important to us that the clothing play a role in the stories and act as a tool to give the viewer insight into these characters, but that the clothing itself didn’t dictate the story entirely. We used continuous light instead of strobes, which is uncommon for a stills shoot. That gave our subjects a chance to move freely and not have to wait for a flash to signal that the shot had been taken. We would tell our subjects to just move and live in the moment and not think or worry about posing for the camera. This created the opportunity to capture those real moments in between poses. It can be distracting to ask actors to stop and pose, so it was freeing to let them be able to keep moving, even if the results weren’t always technically perfect.