If the last menswear season was not a memorable one, there were nevertheless signs in Paris that fashion is undergoing changes, playing down ubiquitous sportswear in order to embrace a more mature and refined direction. Designers seem to have moved away from the ‘ugly cool’ aesthetics ruling fashion lately to explore the cherished notion of beauty without irony. The most anticipated shows this month were Kim Jones’ debut for Dior and Virgil Abloh’s at Louis Vuitton. While Abloh took no risks and stuck to commercial pieces combined with trendy accessories -there was nothing wrong with his clothes, but they all looked quite generic- Jones surprised his audience with a return to the codes of Haute Couture, which he applied to his menswear looks. Suiting was key, as well as historical prints and embroidered effects, from prim flowers and romantic Toile de Jouy to inside-out tailoring and sheer textures. It was a delicate and contemporary proposal, which made elegance and refinement relevant for a younger customer. He also recreated the House’s logo and made it streamlined and sophisticated, avoiding obvious branding. Making suits directional can be a challenge, but Jones managed to give classical tailoring a fresh spin, using upbeat colors and pairing his suits with matching sneakers. Tailoring and technique were also on Glenn Martens’ mind, who presented a forward-thinking collection at Y/Project. Martens loves the idea of hybrid garments and a few of his pieces were literally wrapped-up, referencing Christo’s monumental artworks. The draping technique seemed to encase the body, suggesting a longing for formality, strength and structure. At Raf Simons, oversize satin coats in shocking shades of yellow and green evoked the color palette of Yves Saint Laurent, as well as his own SS/11 collections for Jil Sander. Jackets were on the boxy side, paired with cropped trousers and platform booties. The Belgian designer’s use of classic pinstripe and solid black gave a serious feel to his clothes, despite the show’s youthful styling. Saturated color and holiday prints were on the minds of several other designers, including Jacquemus and Dries Van Noten. While Jacquemus used Provencal motifs, Matisse inspired shades and a casting of classically good-looking men, Van Noten went all the way with graphics that evoked 1970s wallpapers and California during the late 1960s. His collection was optimistic, direct and simple, allowing men to forget the clothes to focus on the rest. 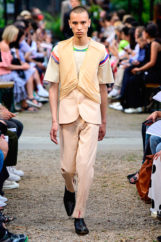 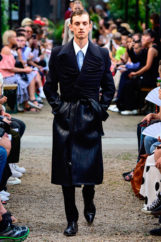 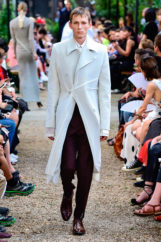 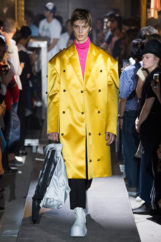 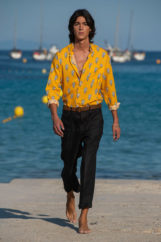 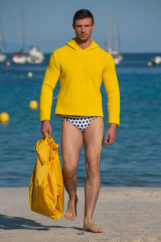 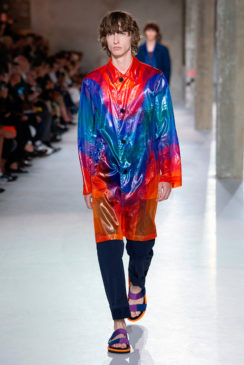 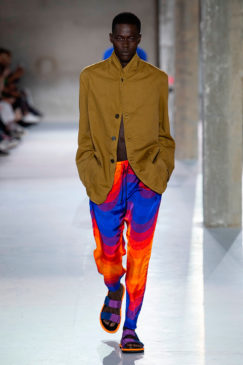