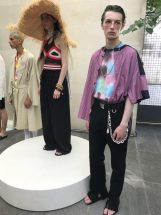 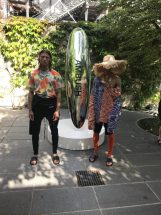 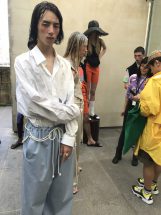 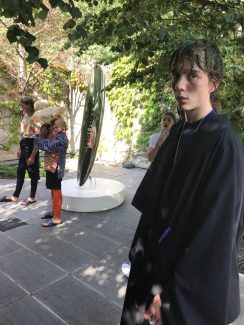 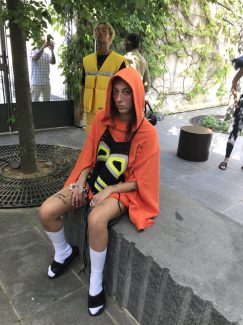 AMBUSH® started out as an accessories brand with an instant and devoted fan base in Japan. The DNA of the brand was pop art inspired with a distinct Tokyo aesthetic. A few seasons ago they added fashion to the mix . I met Verbal & Yoon when they made their Paris debut in 2015 at JOYCE Gallery in Palais Royal. Waves expresses the ebb and flow of waves reflecting the motions of our life experience, these emotions are channeled through the clothes we wear. The color story is beach inspired and the textiles are natural materials like cottons, wools and linens to clothe the body like soft sculpture-like forms hence the emotional commonality with Constantin Brancusi. “Simplicity is complexity resolved” – Constantin Brancusi.

In 2017 AMBUSH® was selected as one of the top 8 finalists for the LVMH PRIZE as well as being elected to the BOF 500. AMBUSH®’s uniquely crafted parts form an idiosyncratic style that led to commissions and collaborations with an illustrious list that includes Louis Vuitton (Kim Jones), sacai, UNDERCOVER, Off-White, and SHU UEMURA.

AMBUSH® opened its first flagship store on September 2nd 2016 in Tokyo, a space which encapsulates the brand’s ethos in a creative environment under one roof with the design studio. Kim Jones asked AMBUSH to design accessories for DIOR Homme. I was totally impressed by the brand’s strong and steady evolution.