Moving from the blinding-white austerity of the Alcazar to that kitsch riot known as The Parker is like being airlifted from a Zen monastery and dropped into a Long Island flea market. After a cab ride beneath solarized palm fronds that gleamed like plastic party streamers, I arrived at the hotel the Desert Sun claims “put Palm Springs back on the map.”

One enters The Parker through a massive, white exterior cut-out wall and an orange door—possibly the most Instagrammed hotel entrance in the U.S.—into a world of carefully mismatched bric-a-brac, noisy throw pillows and macrame owls. Souped-up granny chic for jaded jetsetters.

Somehow all this calculated busyness and giddy nostalgia, brought to you by interior designer Jonathan Adler, had a soothing effect on me—probably because it reflects my favorite pop culture periods, the late ’60s and early ’70s. One half-expects a bikini-clad Goldie Hawn to leap out from behind a brass palm tree, or a brown-faced Peter Sellers to begin chanting “birdie num num” through an amplified sound system.

I love hotel history, so here’s a rundown: The first Holiday Inn in California opened on this site in 1959 but was soon purchased by Gene Autry, the “Singing Cowboy”, in 1961 to house his baseball team, the California Angels. It quickly became known as The Autry Hotel. He sold it in 1994 to hotel director Rose Narva who teamed up with Hubert de Givenchy for the Givenchy Hotel and Spa. (Autry and his wife continued to live on the property, in a private house.) Four years later, the property was bought by talk-show tycoon Merv Griffin and renamed Merv Griffin’s Resort Hotel and Givenchy Spa.

In 2000, Robert Downey Jr. was arrested for drug possession on the resort after police searched his room, number 311. After remaining vacant for a year, hotelier Jack Parker bought the property in 2003 and hired Adler for a $27 million remodel. The Parker Palm Springs opened in 2004. In the middle of the property’s 13 acres of lushly planted gardens stands The Gene Autry Residence, a lavish two-bedroom home that includes a living room, full kitchen and private outdoor lawn area. (A three-night stay here on a weekend during high season will cost you close to $7,000.) There are also 12 very private one-bedroom villas located around the gardens. 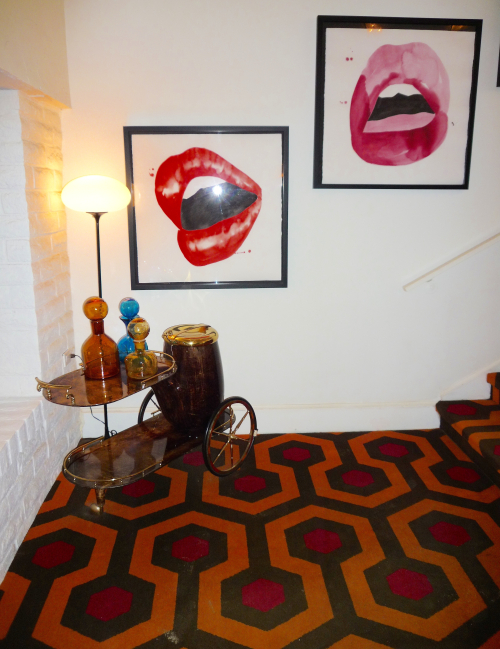 Last year, Adler and his team were invited back to oversee the hotel’s renovation. More design elements were added and out went the old hall carpet and in came the new: Yes, it’s the famous Hicks’ Hexagon Carpet featured in Stanley Kubrick’s The Shining. (More on that later in this post.) 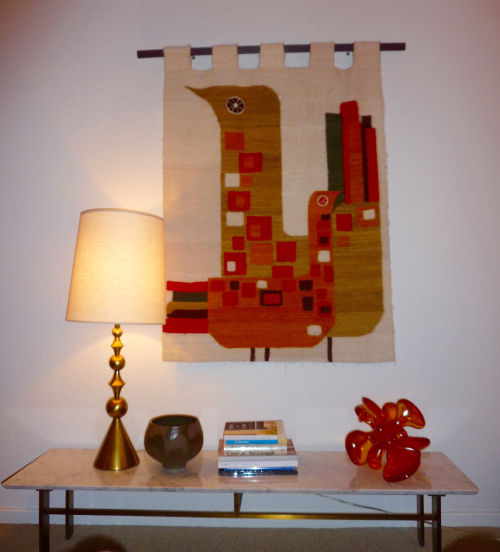 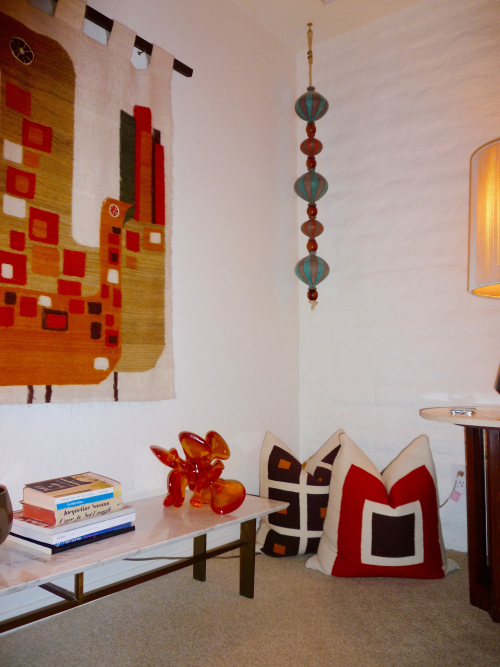 I wasn’t always in agreement with Adler’s more-is-more approach, but I absolutely adored my room (two views above and there’s a photo of my bed in this post’s photo gallery). Cozy, colorful and comfortable, my room was situated in the North Building, on the opposite side of the gardens from the main hotel building. It had a secluded feeling, with a gorgeous view of the gardens and the mountains.

I was also situated conveniently near the Silicon Valley Pool, which despite being the “all ages” pool (there is also an “adult” pool for ages 13 and up), was very quiet and discreet. Plus, the charming bartender brought me a free Muddled Lemonade cocktail! 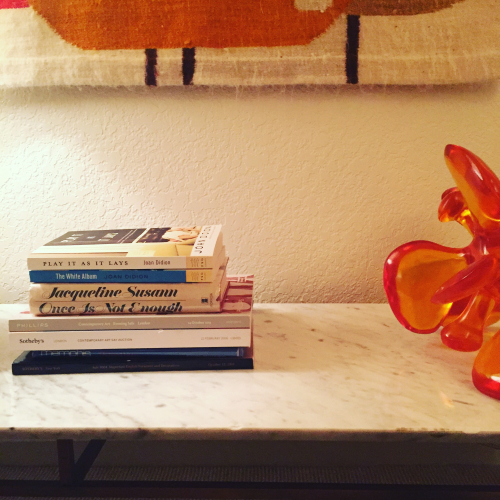 “Books are awfully decorative, don’t you think?” I thought it was positively eerie that one of my favorite novels of all time, Once Is Not Enough, by my favorite author of all time, Jacqueline Susann, was present in my room. (I also loved the inclusion of Joan Didion’s The White Album.)

I immediately christened this “The Jackie Susann Room” and all the time I was there, I listened to the soundtrack from Valley of the Dolls, with Henry Mancini’s score for The Party thrown in for good measure. 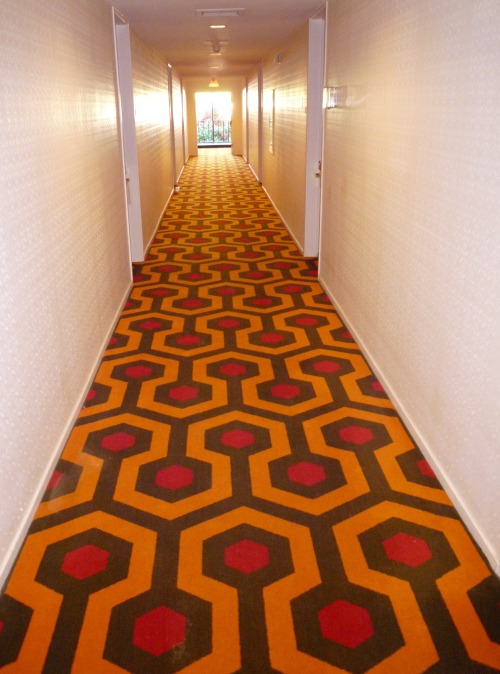 Getting back to this carpet….the original design is by David Nightingale Hicks, the English interior decorator and designer whose work has been a big influence on Jonathan Adler. Hicks did not collaborate with Stanley Kubrick on design elements for the set of The Outlook Hotel in The Shining, so it is theorized that the carpet was an off-the-shelf purchase or was copied. The original design by Hicks is from the 1960s and while it is no longer in general production, you can have it sourced through the Film and Furniture Interior Design service from Starck, the carpet and fabrics company founded in 1938. (I am not exactly sure how Adler sourced it, but Starck seems like a reasonable conclusion.)

Snobbish and debonair, Hicks was the very essence of swinging ’60s British style. “He revolutionized decorating with his startling color combinations, bold geometric patterns, unexpected juxtapositions of antique and modern, and a knack for branding that made him a lifestyle guru.” (NY Times). It is reported that before he died in 1998, he specified that his sycamore coffin have no handles, because he thought them “frightfully common.”

(And here you thought I was going to go on and on about the various conspiracy theories surrounding Kubrick, this carpet and the possibly faked Apollo Moon landing. Oh darling, that is so old hat! I went down a Hicks rabbit hole instead…) 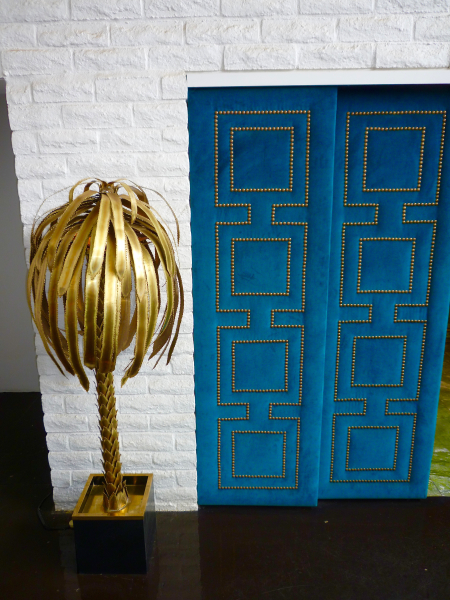 One half-expects a bikini-clad Goldie Hawn to leap out from behind a brass palm tree, or a brown-faced Peter Sellers to begin chanting “birdie num num” through an amplified sound system. 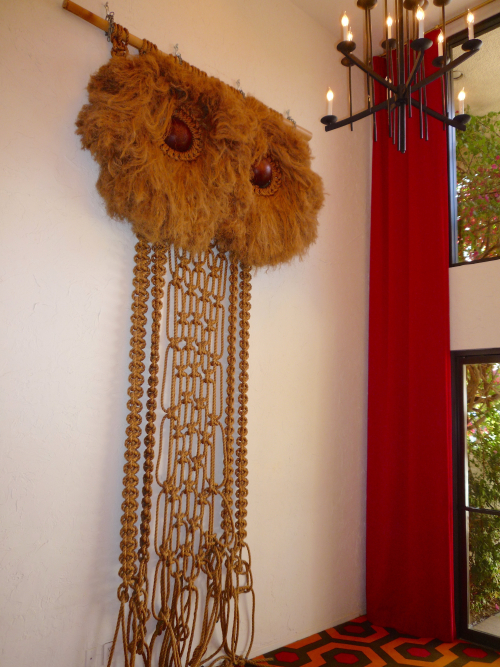 The All-Seeing Owl God guards one of the entrances to the North Building, where I stayed. 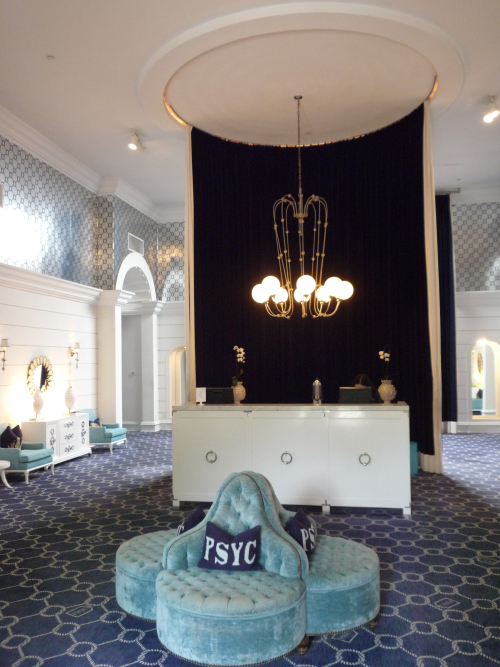 The formidable building that was once the Givenchy Spa is now PSYC: Palm Springs Yacht Club. Yachts in the middle of the desert? Oh, that’s just Mrs. Parker’s sense of humor. It’s still a spa, and a rather extravagant one at that. 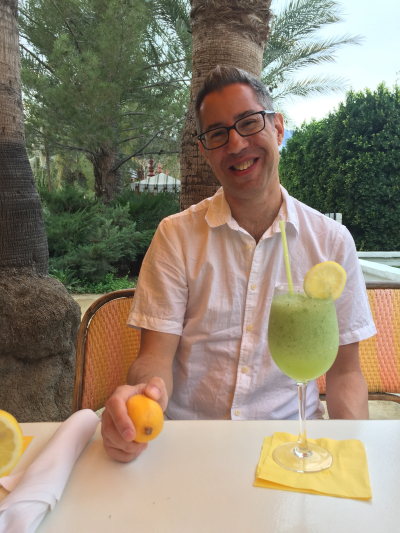 I never got a chance to try out any of the spa’s offerings but here I am enjoying this very spa-like refreshment of mint, cucumber, lemon and, thankfully, citron vodka. After a long hike through the Indian Canyons Hiking Trails, my friend Sameer and I repaired to The Parker’s Lemonade Stand for libations and gossip. Just don’t slurp that frozen drink too loudly or the gregarious bartender might gently chide you! 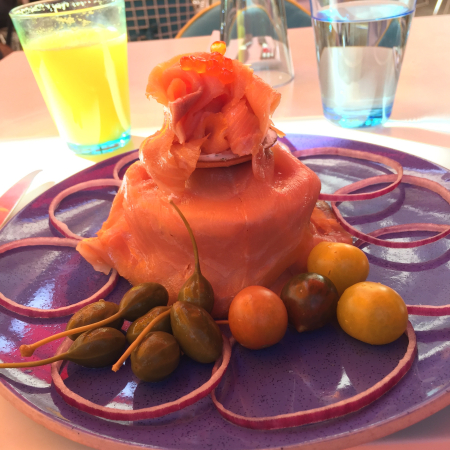 The Parker’s patio restaurant, Norma’s, is notorious for its expensive, show-stopping breakfast items, such as this “Lox and Lox of Bagel” (topped with orange caviar), which resembles a fountain from Liberace’s house, or “The Zillion Dollar Lobster Frittata”, which comes with 10 oz. of Sevruga caviar and will set you back a whopping $1,000. A less obnoxious choice is the very satisfying Normalita’s Huevos Rancheros, made in the shape of a George Nelson sun clock. 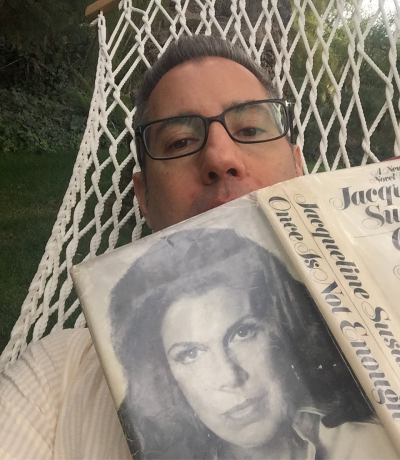 Some hammock time in the garden with Jackie. 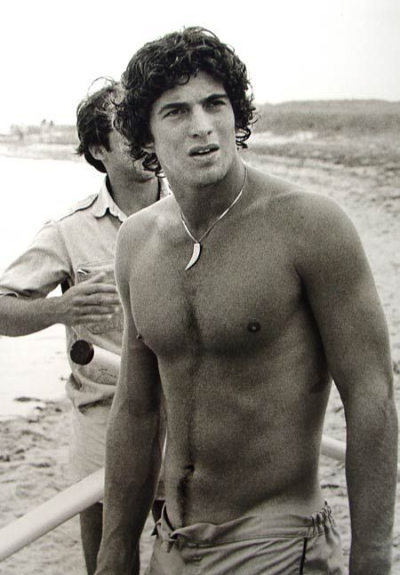 Many of the rooms at The Parker feature an assortment of framed photos by Ron Galella, the legendary paparazzo whom I have written about and worked with. A chesty JFK Jr hung in the bedroom… 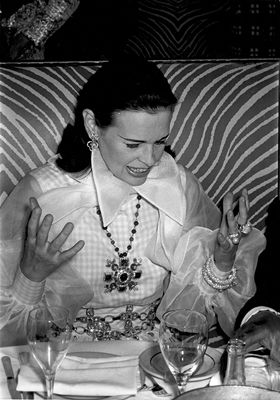 …while Gloria Vanderbilt at El Morocco held sway over the commode. She was a nice choice for the elegant old-ladyish bathroom, done over with blush-pink marble and ornate sea monster faucet fixtures.

Thanks for reading and do consider a stay at The Parker in the near future. The weather is ideal in Palm Springs right now and I’m betting it ain’t wherever you are!