Since 2013, Bowie fans have been making pilgrimages around the world to see the extraordinary David Bowie Is exhibition, which first opened at the Victoria & Albert Museum in London. The traveling show has reached its final destination, the Brooklyn Museum—a gesture calculated to pay homage to New York, the city Bowie loved and lived in during his final years.

I was invited to the press preview last Wednesday where a select group of journalists were granted exclusive photography access (the exhibition opened to the public on Friday and photos are prohibited). Seeing this show, quite frankly, was a religious experience for me.

Before the original show opened in London, the V&A asked my friend and collaborator Camille Paglia to contribute to the exhibition catalogue. The result was her terrific essay “Theatre of Gender: David Bowie at the Climax of the Sexual Revolution.” I feel that this essay is the best way to talk about the exhibition, so every quote in this post is taken from Professor Paglia’s text.

The beautifully produced exhibition catalogue can be purchased at the Brooklyn Museum and Paglia’s piece on David Bowie will also be reprinted in her upcoming essay collection Provocations, due out in October 2018 from Pantheon. (I also have an appearance in the book, but that part is a surprise!)

“David Bowie burst onto the international scene at a pivotal point in modern sexual history. The heady utopian dreams of the 1960s, which saw free love as an agent of radical political change, were evaporating. Generational solidarity was proving illusory, while experimentation with psychedelic drugs had expanded identity but sometimes at a cost of disorientation and paranoia.

By the early 1970s, hints of decadence and apocalypse were trailing into popular culture. Bowie’s prophetic attunement to this major shift was registered in his breakthrough song, ‘Space Oddity’ (1969), whose wistful astronaut Major Tom secedes from Earth itself. Recorded several months before the Woodstock Music Festival, ‘Space Oddity’, with its haunting isolation and asexual purity and passivity, forecast the end of the carnival of the Dionysian 1960s,” writes Paglia. 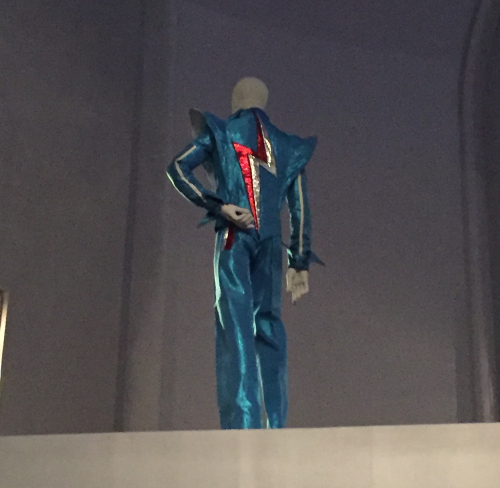 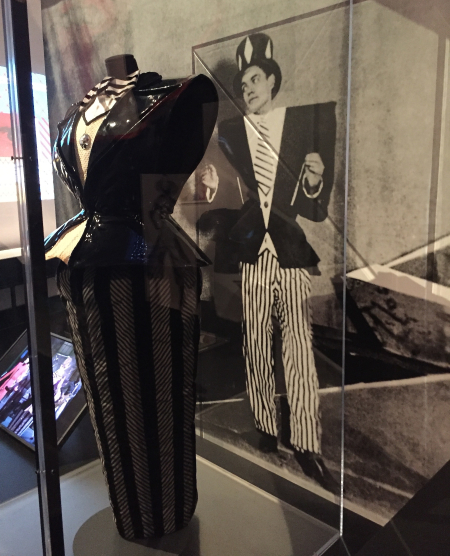 I was thrilled to see the costume Bowie wore during his Saturday Night Live performance in 1979, designed in collaboration with Mark Ravitz with the help of the great Klaus Nomi and Joey Arias, who both appeared with him onstage for the SNL appearance. The costume is modeled after the one designed by Sonia Delaunay and famously worn by the Dadaist Tristan Tzara (in the photograph above) during a 1923 performance of The Gas Heart, a key moment in the Dada movement. The performance ended in a riot led by André Breton, the future founder of the Surrealist movement. A variation of the Bowie costume went on to become one of Nomi’s signature stage looks.

A restrictive column-shaped skirt was substituted for pants in the Bowie costume and, for dramatic effect, he had to be carried out onstage by Nomi and Arias.

“The Surrealists, who emerged from Dada, seized on the fashion mannequin as a symbol of modern personality—assertive and hard-contoured yet empty and paralysed. They were partly following the precedent of the Metaphysical painter, Giorgio de Chirico, who showed genderless tailors’ dummies marooned in twilit deserted plazas.  (Bowie explicitly voiced his admiration for de Chirico and later replicated his work, as well that of the Surrealist René Magritte, in the hallucinatory sets for the 1985 video of ‘Loving the Alien’),” writes Paglia.

“The mannequin was so artificial that it eventually became gender-neutral.  Its spectral aura was well captured in ‘The After Hours’ (1960) from the first season of The Twilight Zone, a TV series launched by America’s greatest native Surrealist, Rod Serling:  here department store mannequins are tracked as they roam, freeze, and frighteningly come alive again.”

(I love this passage from Paglia because recently I have become addicted to watching Serling’s follow-up series to The Twilight Zone, Night Gallery—Seasons 2 and 3 available to Hulu subscribers.) 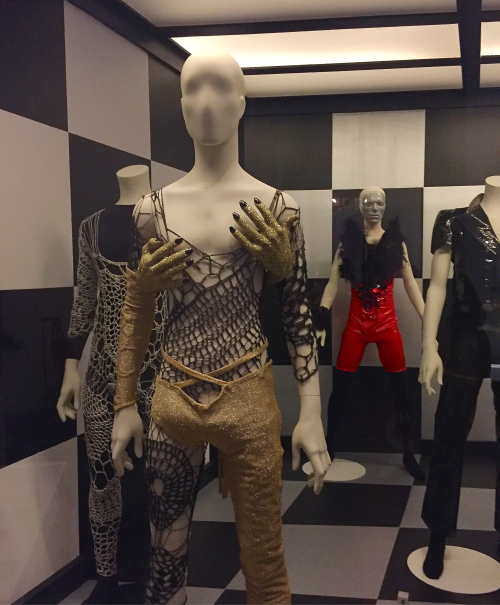 “Bowie’s genius for using the camera as others use a paint brush or chisel—not from behind the camera but before it—was dramatized in The 1980 Floor Show, his last appearance as Ziggy Stardust. This cabaret-structured program was recorded over three nights in October 1973 at the Marquee Club in London and was broadcast on American TV the following month.” writes Paglia.

“In one routine, Bowie wore a see-through black fish-net body suit (designed by him and Freddie Burretti) adorned with two gold-painted mannequin’s hands attached to his chest….it seemed as if his body were being played like a piano—not unlike the way Man Ray turned the body of Kiki de Montparnasse into a sensuous violin.”

My favorite clip from The 1980 Floor Show, featuring the divine Amanda Lear: 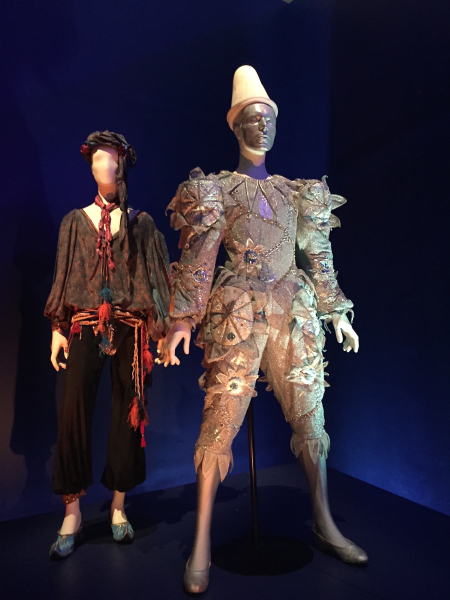 Pierrot costume, 1980, designed by Natasha Korniloff for the “Ashes to Ashes” video and Scary Monsters (and Super Creeps) album cover.

“Bowie has rarely spoken publicly of his mother and, in the 1970s, curtly rebuffed prominent British and American TV interviewers when they presumptuously prodded him about it.  The finale of ‘Ashes to Ashes’ addresses the matter in dramatic symbolism, like the depressed film director Guido’s dream encounter with his parents in a cemetery in Federico Fellini’s 8 ½.  Hectored by a small, gesticulating older woman, whom Bowie said (when introducing this video for a 1993 MTV retrospective) resembled his mother, Pierrot strolls with abashed attentiveness and dutiful resignation along the edge of an infernal underground sea.

A moment before, he stands flinching and paralyzed from the camera flash of a merciless paparazzo:  the shooting of a picture (the video’s third photo portrait) becomes a real bullet shot.  Is Pierrot now dead and his mother come to reclaim his body—like Mary for a pietà?  Bowie’s ending evokes that of The Tramp, where another childlike, genderless clown, Charlie Chaplin in a fake mustache, rambles away down a dirt road.  There are also striking visual parallels to a mordant moment in Fellini’s La Dolce Vita where a fierce matriarch of the old Italian nobility materializes at dawn with a priest and imperiously summons her carousing adult children to Mass.  The other decadent partygoers stand stupefied as they watch their recently priapic but now cowed playfellows fall in line and obediently troop away.” 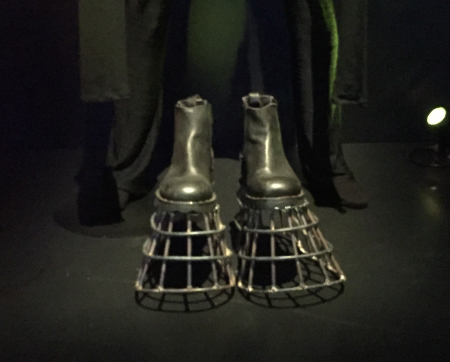 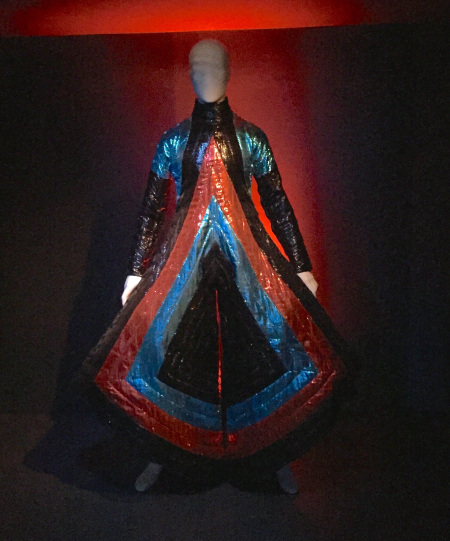 “Bowie pushed Ziggy’s gender into another dimension of space-time, where sexual personae of both East and West met and melded.” 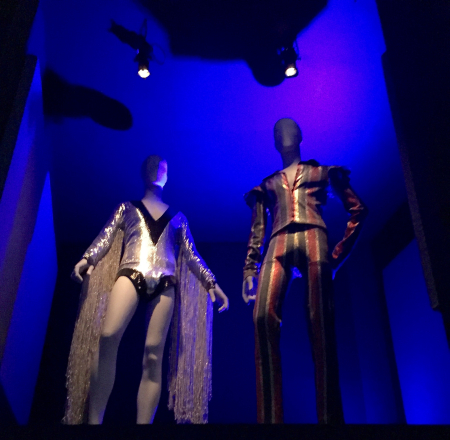 “Although himself a hyperactive athlete of the new libertinism, Bowie never viewed sex as salvation.” —Camille Paglia 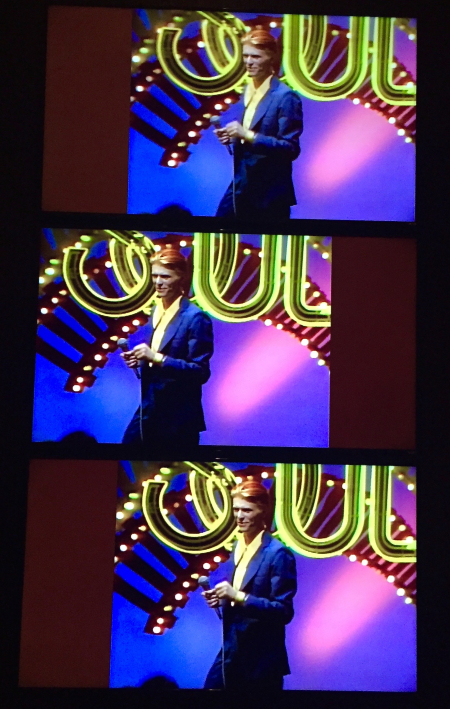 “Bowie said that America had always been ‘a myth land’ for him,” says Paglia. “The ‘idol’ of his youth had been Little Richard, the gender-bending, high-wattage rock ‘n’ roller whom he had seen in person at the Brixton Odeon.” 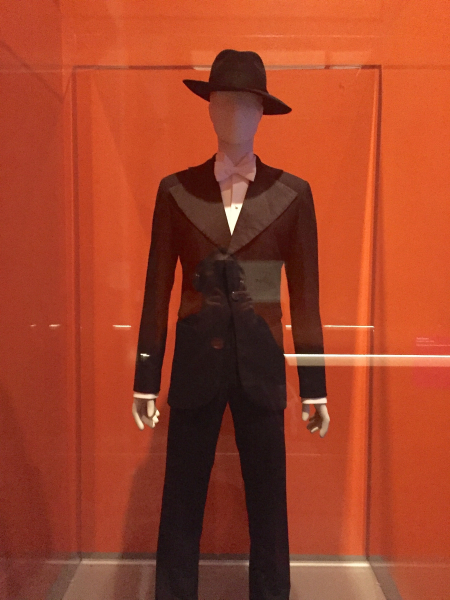 The Brooklyn Museum show features a few pieces that did not appear in the V&A exhibition, including this suit that Bowie wore to the Grammys in 1975. 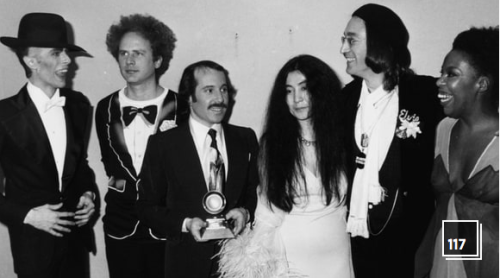 One of the famous photos from that night at the Grammys, featuring Simon and Garfunkel, Yoko and John, and Roberta Flack. 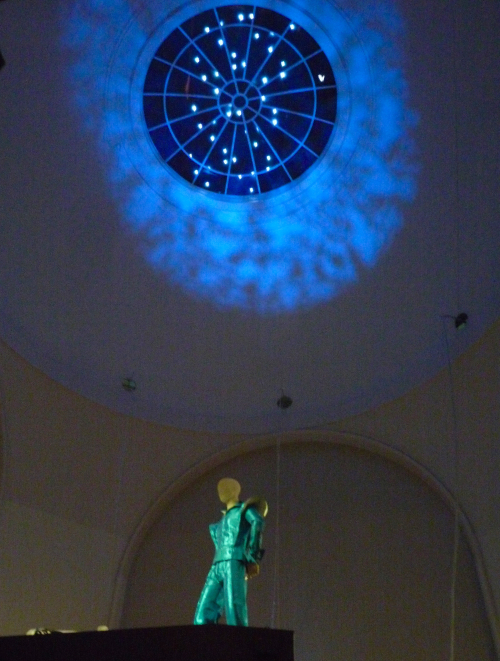 The Brooklyn Museum’s soaring ceilings are a nice complement to the extraterrestrial nature of some of the costumes. 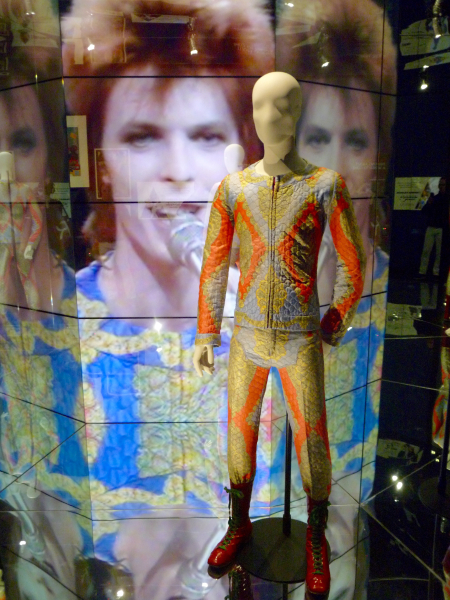 “…in Ziggy Stardust’s supernormal militant energy and shuffled masks, we may have come closer than we ever will again to glimpsing how Shakespeare’s virtuoso boy actors performed the roles of Rosalind, Cleopatra and Lady Macbeth.” 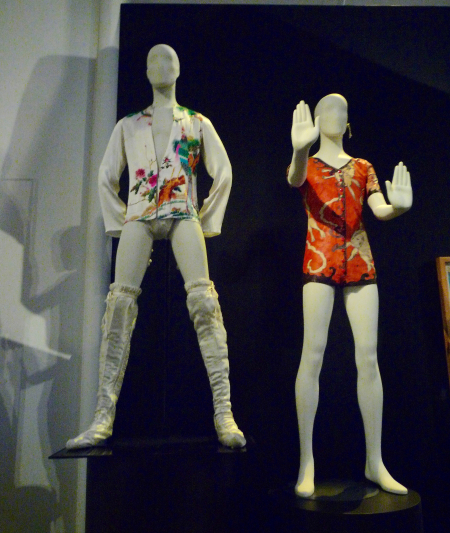 Costumes designed by Kansai Yamamoto, 1972–73, for the Aladdin Sane tour.

“At key moments in the Ziggy gender mirage, Bowie would plant his feet wide and show off his rippling, muscled thighs, a blazon of his underlying masculine athleticism.” 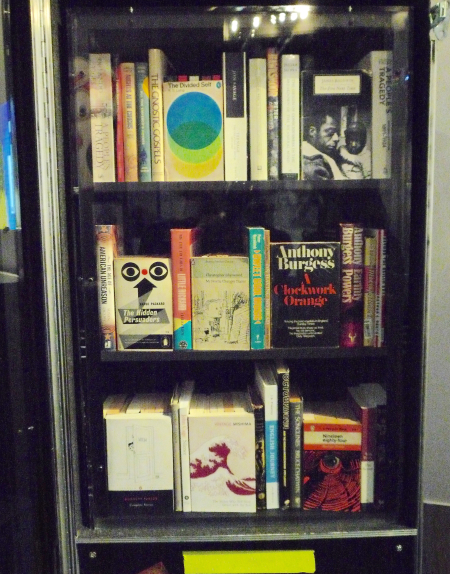 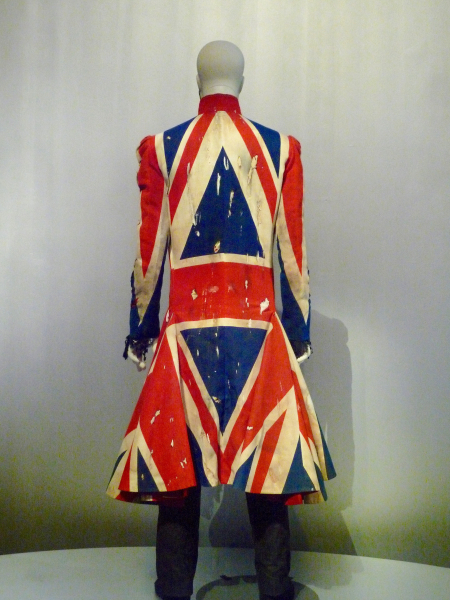 Costume worn during the performance of “TVC 15” on Saturday Night Live in 1979. 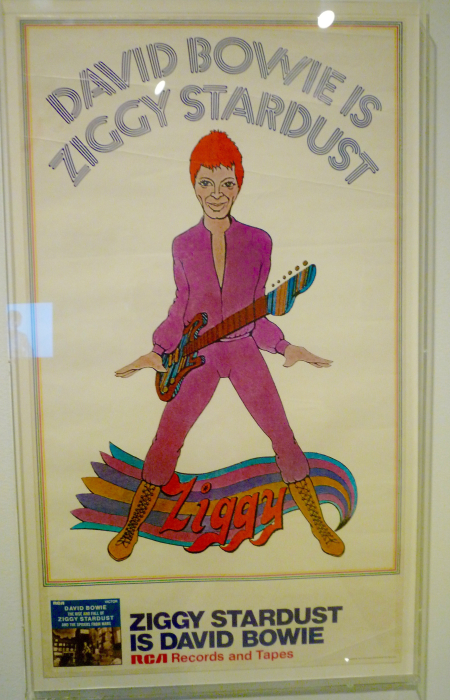 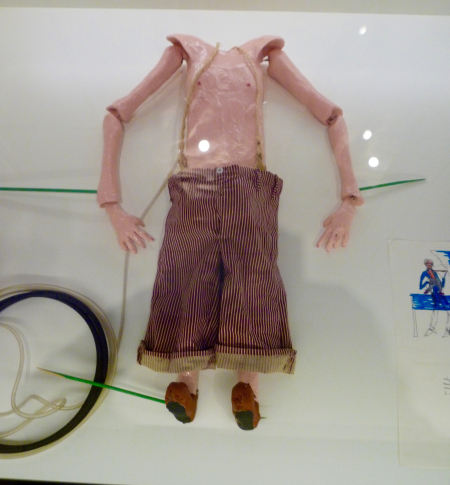 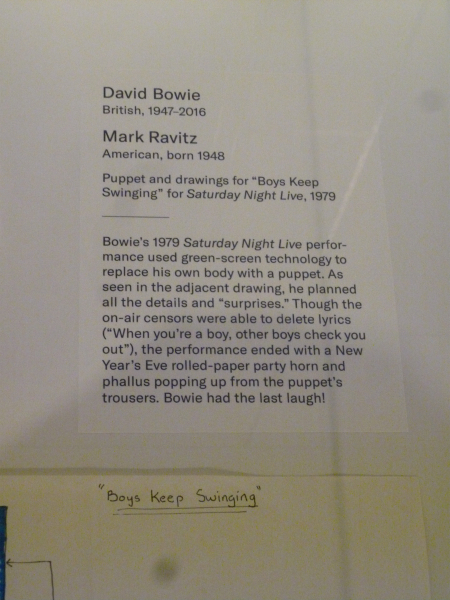 “The third drag impersonation is of Dietrich herself, with whom Bowie had recently starred in Just a Gigolo (1978), directed by David Hemmings. Bizarrely, they never met: Bowie’s dialogue with Dietrich was spliced together in post-production. In “Boys Keep Swinging”, he got his revenge: the aged Dietrich, dressed in an understated knit Chanel suit, walks haltingly with a cane down the fashion catwalk, from which old women are normally banned. Pausing at the edge, she feebly yet contemptuously blows a kiss at the viewer with her cigarette, the fading superstar still hungry for dominance.” 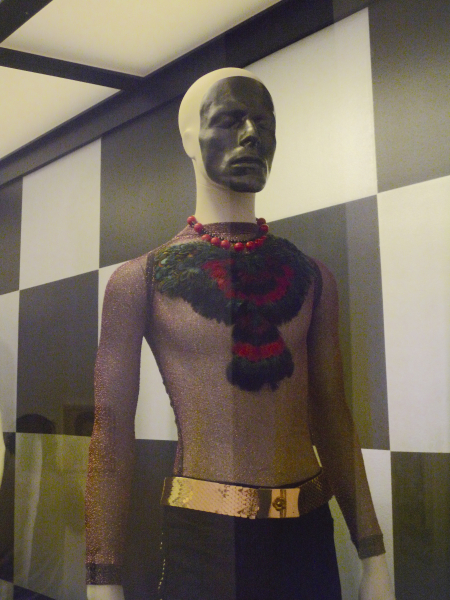 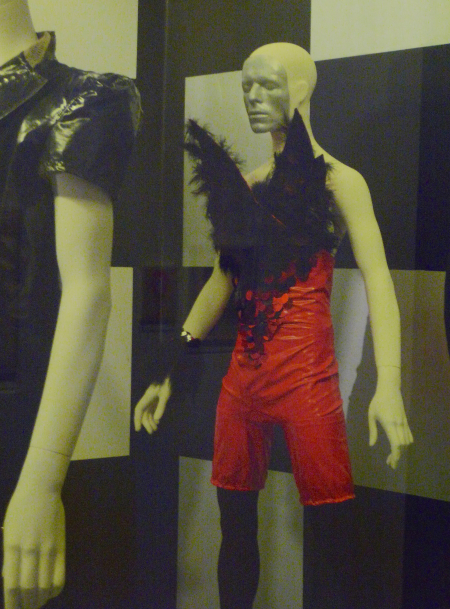 Angel of Death red vinyl costume with marabou and paillettes, 1973, designed by Freddie Burretti for The 1980 Floor Show. 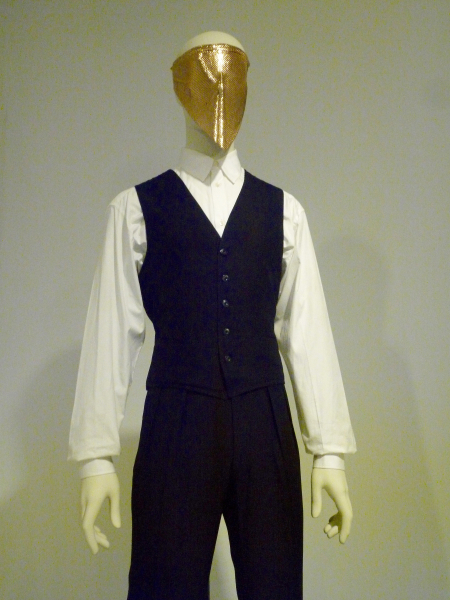 Black suit and dress shirt, 1976, designed by Ola Hudson for the Station to Station tour. 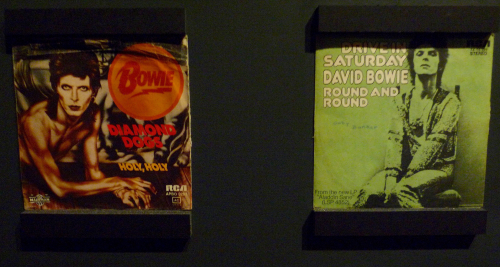 “Bowie returned to Weimar sensibility for the cover of Diamond Dogs (1974), a lurid drawing by Guy Pellaert in a German Expressionist style complementing the album’s dystopian narrative,” writes Paglia. “The opening howl, recitation about ‘rotting corpses’, and graphic bestiality—Bowie and two crouching, ghoulish women are depicted in half-dog form—was the closest he ever came to the Grand Guignol horror-movie gambits of Alice Cooper, whose 1971 European tour had been attended by both Bowie and Elton John.” 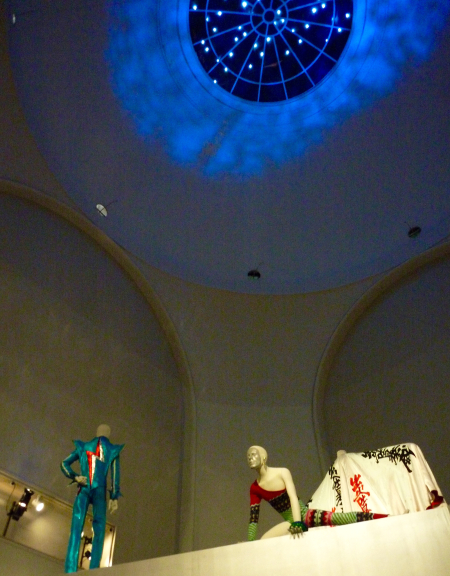 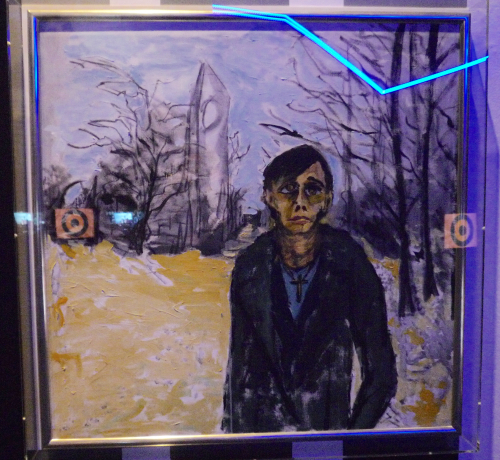 Painting by Bowie, done while he was living in Berlin in the late 1970s. This made me laugh, in light of the recent transgender bathroom drama.

Thank you for reading and I hope you can make it to the show.