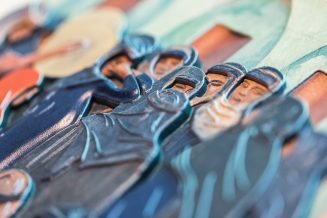 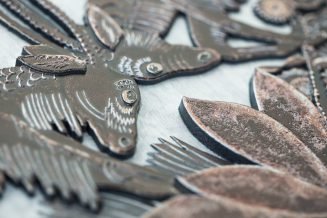 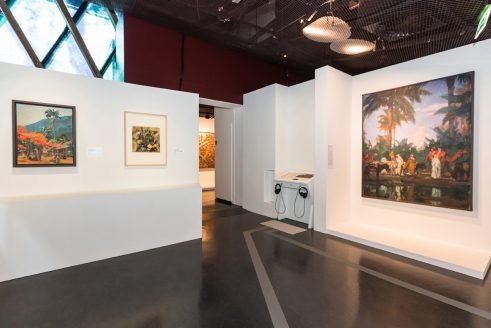 Did you ever wonder how the visually impaired could experience a museum exhibition? I know that is what crossed my mind the other day when I attended the opening of Peintures Des Lointains at the Quai Branly-Jacques Chirac museum. I watched a visually impaired man walking through the exhibit and then met Estelle Costes, Corporate Patronage Manager for Mikli Diffusion France, who shed a bit of light on my lack of knowledge of that subject.  It makes sense that Alain Mikli, who has dedicated a good part of his life to vision, would support a way that permits the blind to experience art through touch.

The three works of art to be explored in this exhibition:

The idea of how to give visually impaired people a way to experience the art was conceived through a close collobaration between the teams of the Quai Branly-Jacques Chirac museum and Mikli Difusion France with the partner Oce-Technologies BV, and the embossed printing technology, giving  the art a tactile precision by means of relief and textures giving  a visual appearance in line with the high definition photographs from which they are designed. Visually impaired people can get as close to the work as necessary, can see colors raised by the art in all of their brillance.

Each tactile interpretation, presented on a desk, is accompanied by a short introduction text in Braille/large print, in French and English, as well as two headphones that divide a bilingual audio commentary describing the tactile interpretation in detail which is essential for the visitors to understand the nature of the elements under their fingers. In addition the comments situate the works in their historical, geographical and cultural context so that the purpose of the exhibition is easily understood.