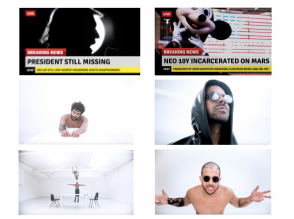 I met Nik when he was designing a menswear collection with Ada Zanditon called Ada + Nik. At that point I had no idea  that  there was a whole other Nik working intensely on his music career. It was through instagram that I discovered  NEO 10Y. So, what is the meaning behind the handle NEO 10Y: “there’s a word and construct in biology, ‘neoteny’, it means ‘the retention of childhood characteristics in the adult animal’. ”

The single “Amerikkka” debuted in late 2016. The video, click the link above, features live sex on film and a mask of President Trump being set on fire and due to its  controversial nature, the film brought Thakkar to the attention of the FBI.

“NEO 10Y is a politicised artist transforming relevant social narratives into progressive recorded art and moody intelligent tracks that fit well on current playlists with anyone from 21 Savage to Woodkid, Perfume Genius to Sza, Future to Mykki Blanco to The Gorillaz to Jamiroquai to Majid Jordan.” NEO 10Y has received kudos from the likes of Billboard, Interview Magazine and Afropunk.