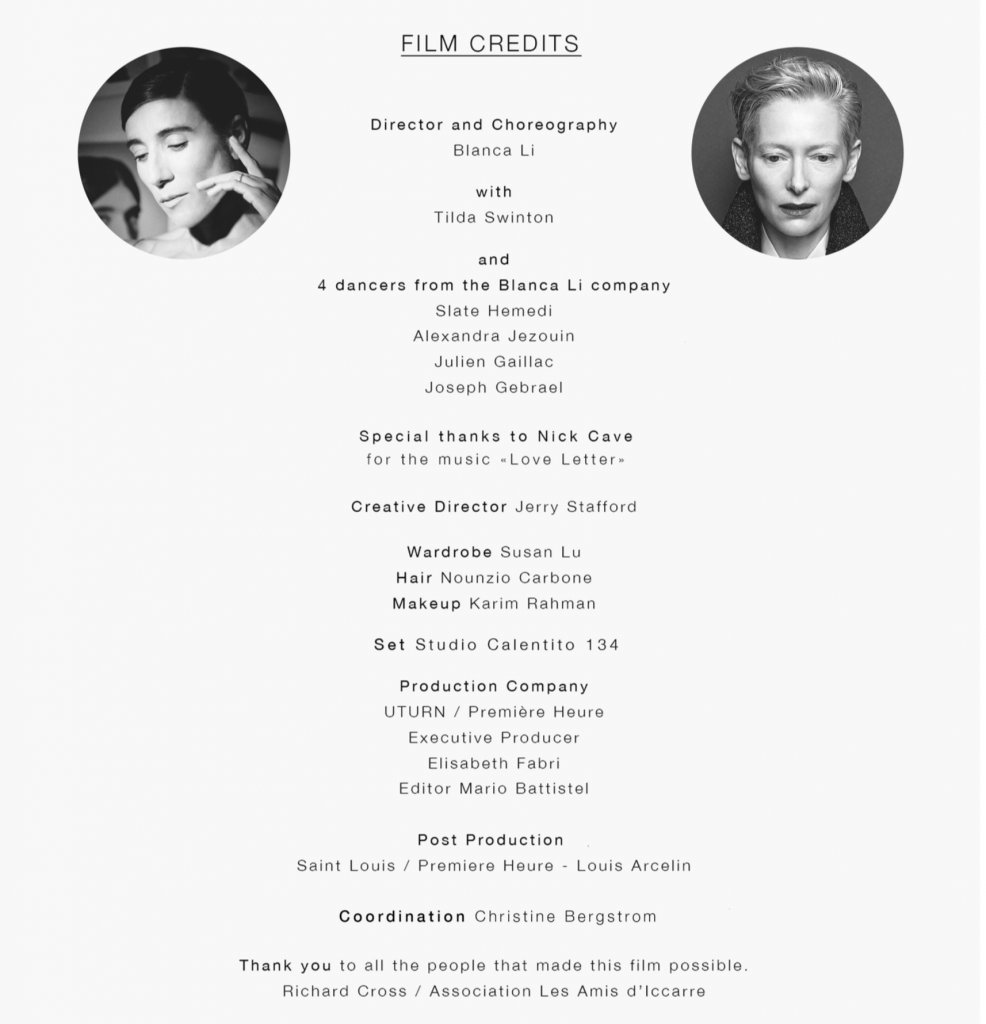 December 1st  AIDS Awareness Day and also the day that the site www.iccarre.net will be launched, there is a French and English version. It is also the launch of the film ICCARRE conceived through the collaboration between choreographer Blanca Li and actress Tilda Swinton, the ICCARRE film aims to use dance as both a visual and an emotional transmitter of ICCARRE’s (taken in short cycles, anti-retrovirals remain effective). The film addresses themes of support, care, balance and harmony which are the key values to the ICCARRE association. Along with the four dancers from the Blanca Li company, Swinton infuses this original dance piece with her own charisma amplifying its visual message.The music ‘Love Letter’ by singer songwriter Nick Cave adds another emotional dimension to the dance narrative evoking ‘a plea, a petition, a kind of prayer’ which informs both the visual and emotional entity of the film. The creative Director of the film is Jerry Stafford. Christine Bergstrom does the coordination and has informed ASVOF of the films existence.

The Breakthrough: the work of Dr Jacques Leibowitch and the ICCARRE programme is unknown to the wide public even though it is well known in French medical circles, that is why this film was made.

In 2003 Dr. Jacques Leibowitch and his associates in France set out to prove that AIDS/HIV patients were being over-medicated and that the over-medication could reduce their physical and mental quality of life to the extend that many stop taking their medicine. Two clinical trials involved 48 and 94 patients taking the standard ‘triple cocktail’ combination treatments seven days a week, Dr. Leibowitch reduced their treatment plan to just four days a week with 100% success rate.

On top of that ten couples with differing HIV status and the HIV Positive partner on the 4-Day Plan conceived naturally and gave birth to fourteen aids free babies, the HIV-Negative partner remaining free of HIV contamination.

The three trials equated to 700 years of what Dr. Leibowitch calls “interrupted treatment” without any failures. The ARNS (The French National Agency for AIDS/HIV Research) has now scheduled a major QUATUOR trial involving 63 public hospital centers to recruit 640 patients who will be prescribed the 4-Day Plan. Volunteers are enlisting at a gallop and the trial should provide sufficient data to support an application for government approval of the ICCARRE 4-Day Plan.

Within three years, France should be the first country to adopt a HIV/AIDS treatment plan that benefits patients by reducing their medication by 156 days per year in complete safety.

The ICCARRE 4-Day Plan will also reduce the cost of taxpayers of the current overmedication of HIV/AIDS patients.