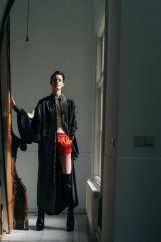 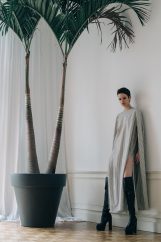 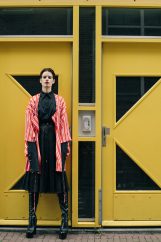 Cem Cinar, the designer behind the brand Rouge Margaux had a magical childhood biking, hiking, climing, running with plenty of room to be happy and adventurous maybe that is why he has such a beautiful smile? He grew up in a small town east of the Netherlands, Arnhem. He has six sisters and appreciated how everyone had their own visual language and way of expressing their personalities. In 1997 he discovered the double pocket cargo trousers all the adults around him were wearing. He’s not sure if that was the beginning of the cargo trouser trend or if it was a revival at any rate it was something that he was drawn to.

He discovered fashion through a documentary on Giorgio Armani in ’98  and that is when the idea of working on clothing 24/7 struck him well, obsessed him. Shortly after that his father gifted him with his first Vogue and then he was hooked on fashion. His goal was to live in Paris, he applied to Esmode and got accepted. He graduated in 2012 and went straight to Y/Project, prior to that he had interned at Rick Owens and Gareth Pugh sales showrooms during his studies. He also did a design internship with Bas Kosters Studio in Amsterdam.  In addition he worked on some free lance designing styling and also worked for SPRMRKT Amsterdam’s in-house collections.

The DNA of his own brand: time to celebrate and accept our differences. ”

If all my sisters and friends walk into a store and browse through a Rouge Margaux rack, I’d love for every one of them to get hooked on a piece that puts their best assets forward.” Cinar said.